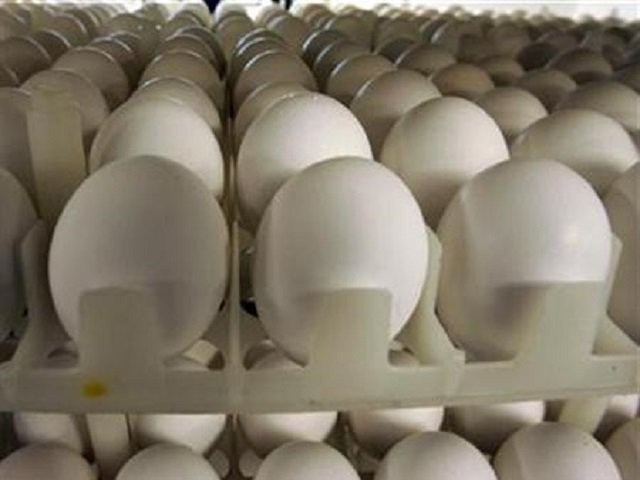 KARACHI: Why did the chicken cross the road? Because the farmer had no need for her anymore. He was making plastic eggs now.

On Sunday night, Darakshan Police apprehended a local shopkeeper and eggs supplier for selling eggs made of a ‘plastic-like’ material.

According to Darakshan SHO Azam Gopang, a resident of Khayaban-e-Seher in Defence Housing Authority Phase VI had registered a complaint that the eggs he had bought from the shop had turned out to be made of a ‘plastic-like substance’, while the egg white and yolk had also mixed together as soon as the shell was broken.

On receiving the complaint, police raided the said shop and arrested the owner, Jameel Khan, while also seizing several crates of eggs.

Gopang told The Express Tribune that the police then contacted the Sindh Food Authority and the assistant commissioner of the area to share details of the discovery. The SFA has sent some of the eggs seized from the shop to the laboratory for testing. An SFA spokesperson said that the eggs appeared to be made of a plastic-like material but they would determine the contents on the basis of the laboratory report.

Meanwhile, police registered a case against the shopkeeper on the citizen’s complaint and presented him in court to obtain his physical remand.

The district and sessions court, however, ordered to release the suspect on bail against a surety of Rs10,000. During the hearing, the investigation officer maintained that the suspect was taken into custody on the recovery of ‘plastic’ eggs from his shop. “We are investigating where he got the eggs from and who are manufacturing and supplying these goods in the city,” the IO told the court, requesting the judge to hand over the suspect on physical remand.

Meanwhile, the suspect said that the eggs were not purchased from his store. “We do not use this kind of shopping bag in which the eggs were brought,” he reasoned. The court ordered to release the suspect on bail against a surety of Rs10,000.

Before the police had taken the shopkeeper to court, though, he had already given up the names of the suppliers. SSP Suhai Aziz told The Express Tribune that they apprehended two wholesalers, Sufyan and Razzak, and a helper from the farm house where the eggs were being manufactured, besides seizing a truck along with 35 crates of what they believe to be ‘plastic’ eggs. These too will be sent to the laboratory for testing, said Aziz.

For her part, the deputy-director of operations at the SFA, Samira Hussain, told The Express Tribune that the complaint regarding the ‘plastic’ eggs was made by a citizen. In his written complaint, the citizen had stated that the eggs he had purchased turned hard and assumed a deformed shape when they were boiled.

SFA officials visited the shop and put the eggs directly under the sun, after which they started to disfigure into a jelly-like or crystal form. During the course of this initial investigation, the shop also received another stock 100 crates, with 10 eggs in each crate. The eggs appeared to be substandard or fake. The officials, after obtaining samples from the shop, sent the eggs for laboratory testing to ascertain their composition.

According to Hassan, the SFA has received similar complaints in the past. In the earlier instance, the eggs were being supplied from the Gharo area of Sindh. The food authority will inspect all the points where the eggs are being supplied while they will also visit the farmhouse at Gharo, said Hassan.

There are simple steps to check whether eggs are fake or not. The real egg is a bit rough while the fake egg bears a shine. The yoke and white of genuine eggs don’t mix on their own until a mixer is used. On the other hand, the yoke and white of fake eggs get mixed together the moment they are broken. More frequently, the two components appear to mix as soon as they come out of the shell. Moreover, the real egg, after boiling, will sink under water while the fake one will swim on the surface.