Girls cycle for empowerment in Karachi

Girls cycle for empowerment in Karachi 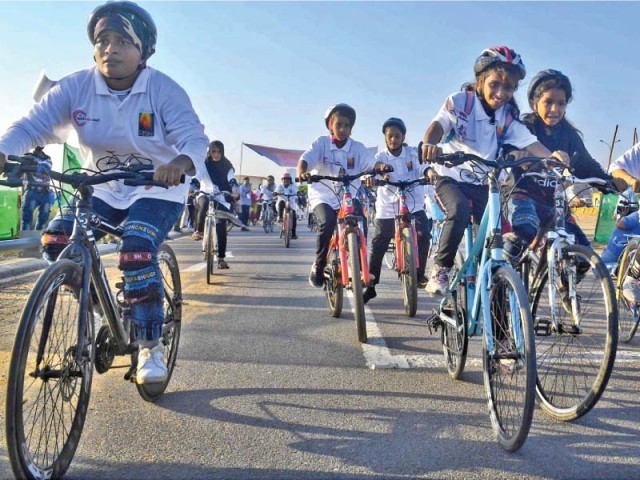 Girls participate in a bicycle race near Do Darya, organised by Lyari Girls’ Cafe to celebrate the International Day of the Girl Child. PHOTOS: ONLINE/INP

KARACHI: In an attempt to break gender stereotypes and draw attention to the benefits of cycling, scores of young women, students and activists gathered at Karachi’s Captain Farhan Shaheed Park on Friday, commemorating the International Day of the Girl Child.

Marking the occasion, Lyari Girls Café organised an event titled ‘Let’s Go Cycling’ at the park, aiming to promote women empowerment through cycling and to highlight the health benefits of cycling.

The event also featured singing performances, awareness sessions on the environment and a bicycle race. The participants of the race, in particular, shed light on the benefits of cycling, which according to them, is an environment-friendly and cheap mode of transport with numerous health benefits.

According to the event’s volunteers, cycling has long been the sign of women empowerment and a symbol of personal mobility and liberty.

Zulekha Dawood, who is a cycling instructor at Lyari Girls Café, said that the activity gives women and especially young girls a chance to lead a healthy and productive life.

“We want to play an active role in advocating for the rights of women, she said, adding that the practice of girls commuting via bicycles should be normalised. “We started with just five girls but now we have over 50 participants who take part in the weekly cycling activity every Sunday,” she continued.

“Parents should not stop their daughters from pursuing this activity and there is a need to promote such healthy exercises in universities and colleges,” said Zulekha.

Meanwhile, a participant of the race, Najamunnisa, lamented that cycling for girls in the country is neither accepted as a hobby nor as a sport. 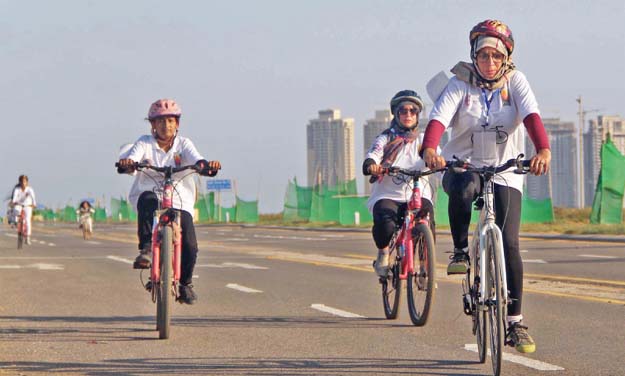 “Girls are not encouraged to go out alone or participate in such activities at large. We do not see girls cycling on the roads at all,” she said. “All in all this activity has instilled confidence in me and has proven that girls are also capable of facing the world alone.”

Another cyclist and a volunteer at Lyari Girls Cafe, Samina Butt, stated that society still looks down upon women and does not consider them as equals.

“There are so many girls who are not allowed to pursue their goals or live a productive, good life. Some of our fellows couldn’t make it to the event because they aren’t allowed to leave their hometowns and this is a sad reality,” she said.

Speaking to The Express Tribune, the organiser of the event, Sultan Mandhro, said that girls in different parts of Lyari as well as Karachi continue to face hardships and are not even allowed to make the choice going out on their own, let alone being permitted to take decisions for themselves.

“Through this initiative, we want to educate and empower young girls and give them a voice that is often found to be lacking in a male-dominated society,” he said. “Our event’s theme corresponds with that of this year’s International Day of the Girl Child- ‘uninterrupted and unstoppable'”.

Talking about the problems that diminish the cause of educating and enlightening girls, Mandhro pledged to continue to raise awareness about women empowerment.

“Of course we have faced resistance from certain sections of society as we work towards empowering young girls but our aim is to carry on with the struggle and not give up,” vowed Mandhro. According to him, his efforts have started showing results as he proudly says, “as many as 78 girls have registered to participate in the cycling event and a culture of cycling is indeed taking shape in [Pakistan].”

Also speaking on the occasion, British Deputy High Commissioner in Karachi, Mark Rakestraw, lauded the efforts of the volunteers and the organisers and said that such public events inspire others.

“This event touches so many issues including gender equality, girls’ education and the environment [preservation]. Climate change affects more women than men,” he said.

“Promoting gender equality is one of the essential foundations of work we do in the British government office here, and opening up access for girls to education is a key goal in particular,” he maintained. “Since 2011 we have supported education reforms and so far about 11 million girls have benefitted [through our efforts],” said Rakestraw.

Landlord kills one, injures four others in Hyderabad