US senators visit AJK, vow to pile up pressure on India

US senators visit AJK, vow to pile up pressure on India 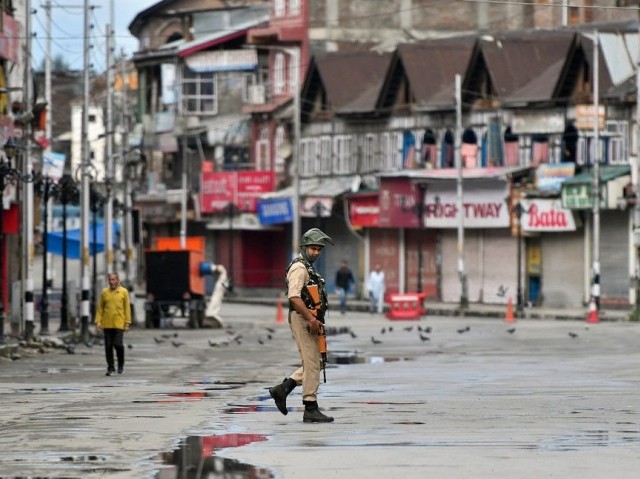 ISLAMABAD: A high-level US congressional delegation visited Muzaffarabad in Azad Jammu and Kashmir (AJK) on Sunday and pledged to continue pushing India to lift the curfew it had imposed in occupied Kashmir and release the prisoners rounded up in its clampdown in the valley “as a first step”.

“A US delegation comprising Senator Chris Van Hollen, who was recently denied entry to Indian Occupied Kashmir (IOK) by New Delhi, and Senator Maggie Hassan, along with their staffers and US Charge d’Affaires Ambassador Paul Jones, visited Muzaffarabad,” read a handout issued by the Foreign Office.

“The purpose of the visit was to see the ground situation and gauge public sentiments following India’s illegal actions in Occupied Jammu and Kashmir,” it added.

The larger objective of the visit was to expose India’s crackdown in occupied Kashmir, which has been under total lockdown since August 4, a day before India stripped the valley of its semi-autonomous status.

A Foreign Office official told The Express Tribune that Pakistan was ready to facilitate any foreign visitor intending to travel to AJK. “Unlike, India, Pakistan has nothing to hide,” the official added.

Pakistan’s move would certainly ratchet up the pressure on India which has barred foreign journalists and other visitors from travelling to IOK.

Indian had barred Senator Hollen from visiting Srinagar, raising suspicions that New Delhi was trying to cover up the humanitarian crisis in the region.

Not only were Hollen and his colleagues given permission to visit Muzaffarabad, but also given a detailed briefing by the military and the AJK government.

According to the Foreign Office statement, the American senators said they shared Pakistan’s concerns over New Delhi’s human rights abuses in IOK and would continue to urge India to lift the curfew and release all prisoners as a first step.

The AJK leaders thanked the senators for their visit and appreciated their support for the just cause of the people of Jammu and Kashmir.

While offering them to see firsthand the vibrant and thriving Kashmiri community in Azad Kashmir, the US delegation was informed about the historical background of the Kashmir dispute and the deteriorating situation in the occupied territory in the wake of the prolonged curfew and suppression of fundamental rights particularly since August 5.

The AJK leadership expressed the hope that delegation’s visit to AJK would help it in gathering first-hand information, understanding the prevailing humanitarian crisis in IOK and explaining the ground situation to their colleagues at Capitol Hill and the US government on their return.

It was noted that the Indian government’s policy of denying neutral observers to visit IOK had exposed New Delhi’s “all is well” propaganda.

The US senators assured the AJK leadership that on their return to the US, they would take up the issue of Kashmiris’ right to self-determination with their colleagues.

They said a US Senate committee had already expressed its grave concerns over the human rights trampling, communications blackout and the arrest of political leaders and workers in occupied Kashmir. In this connection, they added, a comprehensive debate would be initiated in the US Senate.

The AJK president told the delegation that the people of occupied Kashmir expected the US government to mount pressure on Indian Prime Minister Narendra Modi’s regime to end its oppression in the valley to ensure peace and stability in the region.

“It is responsibility of the international community, including the US, to take notice of India’s threats against Azad Kashmir and Pakistan and about the use of nuclear weapons and play its role in preventing a possible war in the region,” he added.

Masood said the international community must not ignore the Hindutva philosophy because it was designed to fan hatred against Muslims and other religious minorities.

The AJP president welcomed US President Donald Trump’s offer of mediation on Kashmir. “The US president, without waiting for India’s willingness, should take all steps including mediation to bring an end to the human rights violations in occupied Kashmir,” he added.

“However, for a peaceful solution of the Kashmir conflict, it is imperative to involve the Kashmiri people in the talks.”

The AJK president particularly thanked US Congressman Brad Sherman, the chairman of the House Subcommittee on Asia, who had demanded a debate on the Indian brutalities in occupied Kashmir. The debate will be held on October 22.

Rejecting the Indian allegation that 500 terrorists were set to intrude into occupied Kashmir from AJK, Masood said the people of the liberated territory supported the struggle of their brethren in IOK through peaceful and political means.

Responding to the US senators’ questions, the AJK president said at present the number of refugees who had left occupied Kashmir because of Indian oppression had reached 40,000 and the youth among them wanted to cross the LoC to help their brethren.

“If India continues to perpetrate its atrocities, it won’t be possible for the government to prevent these youth from crossing the LoC.