Rise of both Islam and Hindui­sm in the subcon­tinent makes Sindh a place where faith and cultur­e intert­wine
By Razzak Abro
Published: September 23, 2019
Tweet Email 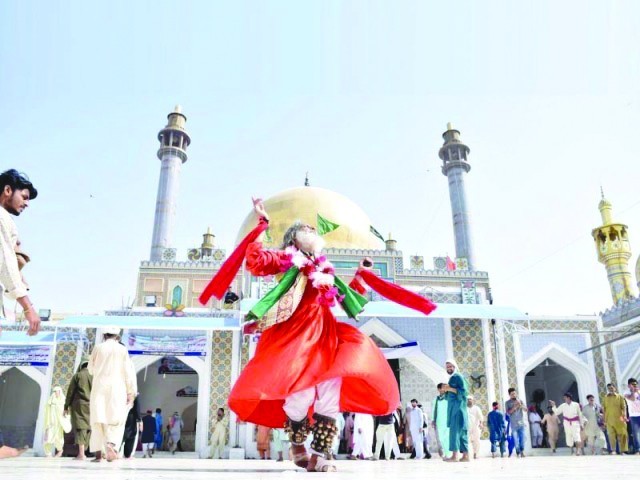 Lal Shahbaz Qalandar’s shrine in Sehwan attracts not only Hindus and Muslims from across Pakistan but also draws numerous followers from countries like Iran and Iraq. PHOTO: FILE

KARACHI: The banks of the Indus River have witnessed the rise of not one but two major religions in the subcontinent. Some 4,000 years ago, Hinduism flourished and grew in the fertile lands along the Indus and its tributaries. Then, in the early part of the 8th century, Islam established a foothold in the same shores before ultimately growing exponentially in most parts of South Asia.

The centuries since saw the region, particularly Sindh, develop into a hub for religio-syncretic expression, with the tombs of Sufi saints, in particular, attracting devotees from all over the Subcontinent no matter what faith they professed.

This phenomenon can be witnessed to this very day as hundreds of thousands of people, Muslim and Hindu, throng to Sufi shrines peppered through the province. The festivals held at these locations see no caste, creed or colour, and are as much an expression of culture as they are of faith.

For instance, Lal Shahbaz Qalandar’s shrine in Sehwan attracts not only Hindus and Muslims from across Pakistan but also draws numerous followers from countries like Iran and Iraq, to celebrate the festivities of the saint’s Urs, which take place from the 18th to 21st of the Muslim month of Shabaan. “At the Urs, the Hindu residents of Sehwan are the first to perform the Rite of Mehndi (Rasm-i-Henna),” Badar Abro, the author of Hinglaj Yatra, told The Express Tribune while explaining the religio-syncretic nature of the festivity.

The two faiths are also known to gather under one roof in the city of Hyderabad, to celebrate Chaliha Sahib Jo Melo, a festival in remembrance of Jhulelal, another relgio-syncretic Sufi saint associated with Varuna, the Hindu deity of water. Similarly, Satram’s Festival also draws many including Muslims and Hindus, as well as visitors from India, Singapore, and Malaysia, to the district of Ghotki, making the journey a rich cultural experience rather than one of solely religious significance.

However, the shrine that welcomes the most religiously diverse group of devotees and visitors is that of the ‘saviour saint’, Abdullah Shah Ghazi. Situated near the Karachi coastline, Abdullah Shah Ghazi’s mazaar is believed by many Karachi residents to be the metropolis’ first and perhaps the only line of defence against natural disasters like storms and cyclones. And so the residents regardless of their cast or creed grace the shrine every day in waves to pay their respects to the city’s saviour saint.

Although these shrine-centric festivals may be hosted by certain religious communities, unlike mainstream places of worship, it is their all-welcoming nature that our intelligentsia has dubbed the gatherings to be more cultural than religious. Addressing the matter, Mumtaz Bukhari, a journalist from Sukkur Town, explains that it is the close proximity of religious places in Sindh, which add to the region’s diversity.

“The island of Sadh Belo in Indus River is home to a centuries-old temple where Hindu devotees gather during May-June to perform the pilgrimage. The same belt also houses the St. Xaviour’s Church, the Mama Parsi temple and the historic Manzilgah Mosque. It is this intermixing of people and various faiths, which gives Sadh Belo its vibrant diversity,” he added.

Speaking to The Express Tribune, Riaz Suhail, a senior journalist from Karachi, also endorsed this point of view. He believes that cultural colour dominates over religion-oriented events in Sindh. According to him, festivals being held at shrines have mostly the same cultural colour whether these belong to Muslims or Hindus. For example, he adds, festivals like Rama Pir at Tando Allahyar and Pir Pithoro in Umerkot have many cultural similarities with the celebrations at the Shrine of Lal Shahbaz Qalandar giving Sindh its unique religio-cultural flair.