Unions stress that real change will only occur if labour­ers are taken in accoun­t
By PPI
Published: September 12, 2019
Tweet Email 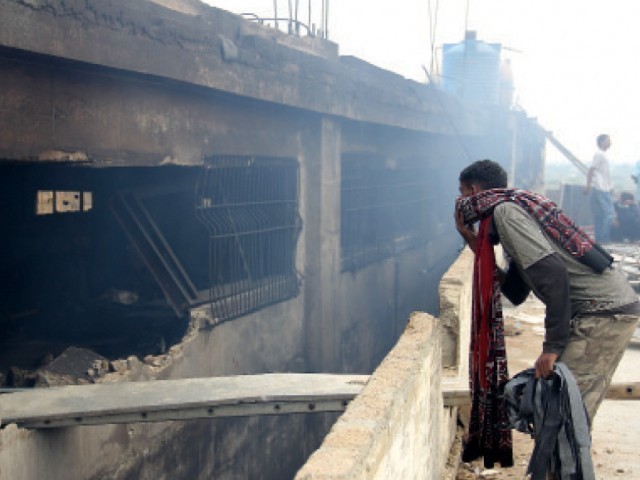 The court summoned more witnesses on the next hearing. PHOTO: FILE

KARACHI: Wednesday marked seven years since the Baldia Factory fire of 2012 in which over 250 workers were burned alive. A report launched on the anniversary of the tragic incident notes that textile and garment factories in Pakistan remain as unsafe now as they were then.

According to the report, initiatives established in the past years have failed to put workers and their unions, at the centre of their programmes and therefore will fail to meaningfully address the safety issues in the industry.

Unions and labour education organisations in Pakistan are calling for a mechanism modelled on the safety programme put in place in 2013 after the Rana Plaza building collapsed in Bangladesh.

“The total lack of adequate safety monitoring in the Pakistan garment industry has cost hundreds of lives over recent years,” said Labour Education Foundation Director Khalid Mahmood. According to Mahmood, even small measures such as ensuring workers are never locked inside factories and removing stored products away from emergency exits could have saved hundreds of lives in the Baldia Factory tragedy. Such measures could have prevented loss of lives in many fires since, said Mahmood.

The report highlights that although multiple initiatives aimed at addressing workplace safety have been initiated in Pakistan since 2012, all of them have limited transparency and none have been enforceable. Besides, none of them were developed with the participation of unions or other labour rights groups in Pakistan. According to the report, worker representation is missing not only in their design, but also in their implementation and governance.

The report states that brands and retailers continue to operate on the basis of the same corporate auditing schemes which failed to prevent mass casualties in the past and could not improve worker safety. Besides, government inspectorates remain understaffed, underfunded, and unable to properly manage the growing industry. Workers are left at the mercy of unsafe conditions in factories and mills as their concerns are not taken into account.

“Pakistan’s garment factories continue to be death traps. Seven years after this horrible fire, it is high time for companies whose clothes and home textiles are made in Pakistan to start taking safety for workers seriously,” said Nasir Mansoor, the president of the Pakistani National Trade Union Federation.

The report urges brands and retailers who employ labour from Pakistan to heed to the Pakistani labour movements’ demand to support the formation of a legally-binding agreement between apparel brands, local and global unions, and labour rights groups to make the workplace safe. According to the report, such an agreement must draw upon the Accord on Fire and Building Safety in Bangladesh. This would include ensuring transparency, enforcement, commercial obligations, and worker participation at the centre of the agreement.

“We have seen in Bangladesh, where two safety initiatives emerged at the same time, that worker-involvement, transparency and a binding nature [of the agreement] are vital to creating a successful safety programme,” said Ineke Zeldenrust the International Coordinator of Clean Clothes Campaign. Zeldenrust compared the Accord to the “corporate-controlled Alliance for Bangladesh Worker Safety [which] never involved independent worker-representative groups in its design, development, or governance, and refused to require legally-binding commitments from companies”. In comparison, she said, the Accord ensured transformative, transparent, enforceable and effective inspection and remediation of the system. “Any safety programme in Pakistan must learn from and build upon these lessons,” she added.

The report also recommends that the provincial governments as well as the Centre take steps to enhance compliance in factories that would not be covered by the foreseen labour-brand accord.

“In addition to action by apparel companies sourcing from Pakistan, it is important that national and provincial governments increase capacity, coverage, and effectiveness, in order to make sure that all garment factories and textile facilities in Pakistan become safer – not only those producing for the international market,” said Pakistan Institute of Labour Education and Research (PILER) Joint Director Zulfiqar Shah.