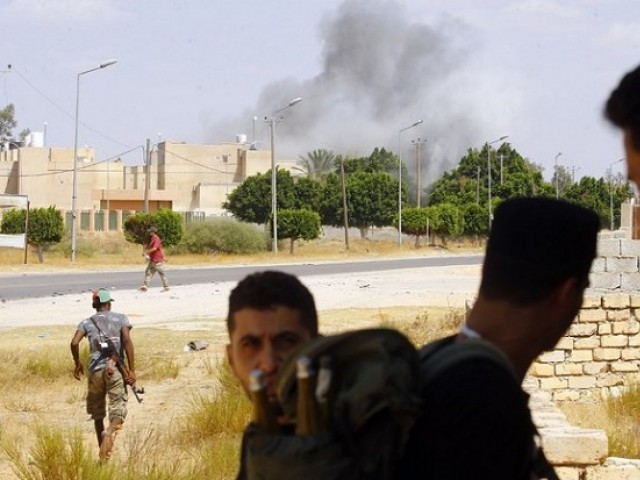 Fghters loyal to the UN-recognised Government of National Accord (GNA) during clashes with forces loyal to Khalifa Haftar, in Espiaa, about 40 kilometers south of Tripoli last month. (AFP/File photo)

UNITED NATIONS, UNITED STATES: The United Nations (UN) special envoy to Libya warned on Wednesday that without action by the Security Council, the country’s conflict could escalate if outside patrons step up support for the warring sides.

“Many Libyans feel abandoned by part of the international community and exploited by others,” Ghassan Salame said by video link with the council.

“Without the unequivocal support of this council and the broader international community for an immediate end to the Libyan conflict, I believe we are faced with two highly unpalatable scenarios,” Salame added.

One is “persistent and protracted low-intensity conflict,” he said.
The other is increased support for either warring side by their outside patrons.

This, he said, would lead to “a sharp escalation that will assuredly plunge the entire region into chaos.”

“The idea that war should be given a chance and that a military solution is at all possible is quite simply a chimera,” said Salame, who has often complained that the council is not united on the Libyan conflict and that some members support one or the other of the warring sides.

Libya has been wracked by chaos since the 2011 uprising in which president Moamer Kadhafi was killed.

His forces are fighting those of the Government of National Accord led by Fayed al-Sarraj, which is recognized by the international community.

Sarraj is backed by Turkey and Qatar, while Haftar enjoys varying levels of support from Egypt, the United Arab Emirates, the United States, Russia, and France.

A member of Lawyers for Justice in Libya, Marwa Mohamed, also told the council there was no clear message on Libya from the international community.

UN calls for Libya ceasefire as death toll climbs to 1,000

During discussions on the conflict, several states, such as Kuwait, South Africa, Indonesia and Germany, complained about what they called interference in that country’s affairs and repeated violations in the past five months of an arms embargo imposed on Libya in 2011.

Major powers such as the US, France and Britain avoided giving speeches Wednesday, saving their turns for a closed-door session to be held after the public one.

At the end of the session, Russian Ambassador Vassily Nebenzi, the council’s president, said it had shown “a quite big degree of unity on Libya.”

“Everybody was in the agreement that there is no military solution for the conflict, that the parties should stop hostilities as soon as possible, announce a ceasefire and return to a political negotiations under UN auspices,” he said.