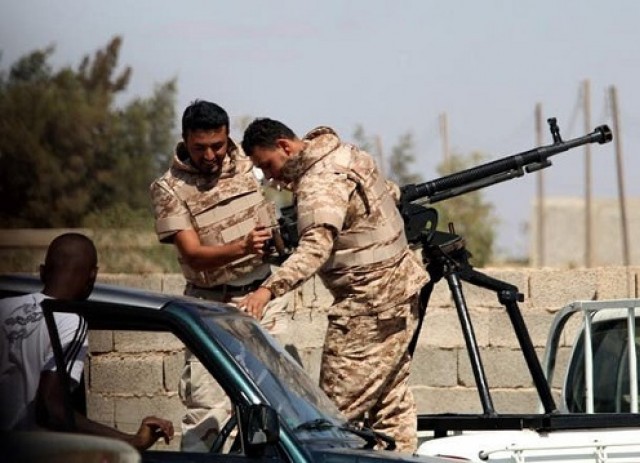 UNITED NATIONS, UNITED STATES: United Nations (UN) Secretary-General Antonio Guterres said on Thursday that he fears Libya will end up in a “full civil war” unless moves are soon made to end the conflict.

“Unless action is taken in the near term, it is highly likely that the current conflict will escalate into full civil war,” Guterres said in the report.

He acknowledged the need for the support of the international community in finding a political solution for the country, where forces loyal to strongman Khalifa Haftar launched an offensive to take the capital Tripoli from the UN-recognized Government of National Accord in early April.

“I urge all parties to stop using explosive weapons, including by aerial bombardment or shelling, in populated areas because of their likely indiscriminate effects,” the secretary-general wrote.

Fighting on the outskirts of Tripoli has left 1,000 people dead and displaced 120,000 since the start of Haftar’s offensive.

“A political solution to the Libyan conflict requires the full and united support of the international community,” Guterres said.

“I am concerned by the presence of foreign fighters and mercenaries being employed by parties to the conflict in Libya as well as by the influx of weapons to the country,” he said, calling for strict adherence to an arms embargo in place since 2011.

UN envoy to Libya Ghassan Salame has also denounced such “external interference,” in an interview with French newspaper Le Monde.

“When I bring this situation up to the Security Council,” he said, “I do not find that there is the necessary unity to sanction such behaviours, which contradict both the sovereignty of the country and related UN resolutions.”

According to Salame, these “interferences… encourage opposing parties within Libya to keep fighting.”

Government of National Accord chief Fayed al-Sarraj is supported by Turkey and Qatar, while Haftar is backed by Egypt and the United Arab Emirates and has received political support from the US, Russia and France.

In his report, Guterres also expressed concern for refugees and migrants in Libya.