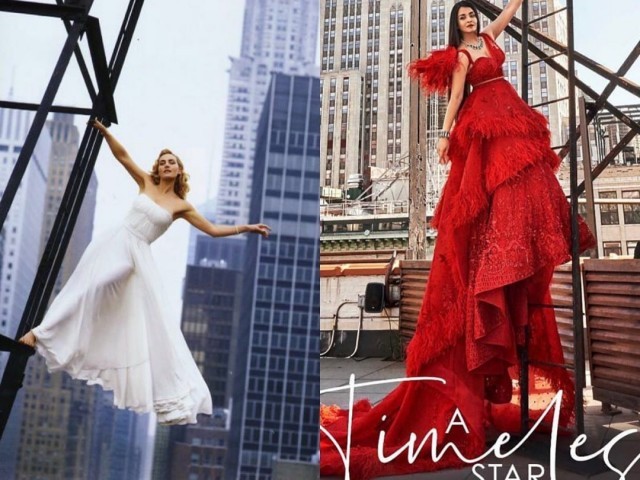 Aishwarya Rai is not fooling anyone with her latest photo shoot. The Bollywood actor, who had been missing from the limelight for a while, tried to make a comeback when she featured on the first print cover of a new magazine, Peacock, by designers Falguni and Shane Peacock.

And captioned, Instagrammers did. One user wrote, “More like Expectations vs Reality,” while another called out the Bollywood star for not having expression. “The other two women has something called personality which Ash lacks.”

Seems like Aishwarya’s copy-cat pose doesn’t end with Kate. The Instagram account shared a second picture also, which has Pretty Woman star Julia Roberts in a similar pose from a photo shoot for Harper’s Bazaar.

The first picture is a collage, which shows Aishwarya standing on a ladder, holding on to one of the steps. Kate, in the original, is wearing a white gown and similarly holding on the steps of a ladder on which she stands. In the picture collage with Julia, the Hollywood actor is seen climbing a rocky outcrop with a pink ball gown.

A post shared by AishwaryaRaiBachchan (@aishwaryaraibachchan_arb) on May 22, 2019 at 5:54am PDT

Aishwarya shared another picture from the same photo shoot recently, but in a beige-coloured cut-work inspired gown for the new magazine. This time, it doesn’t seem to be a copy-cat, we hope.