The honour was given to her by the public­ation 'Muslim Vibe'
By Sarah Price
Published: August 28, 2019
Tweet Email 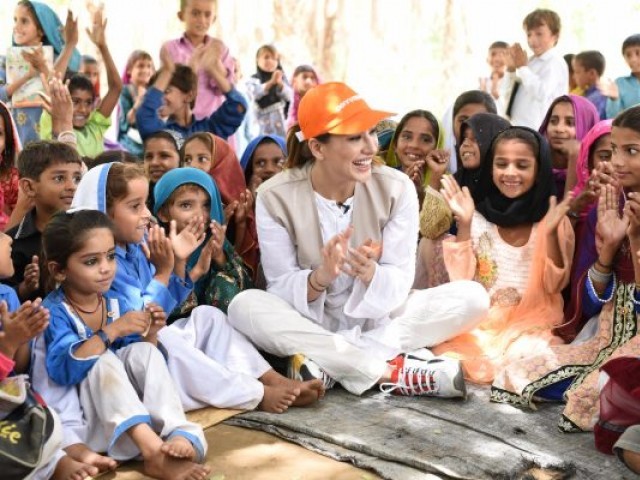 KARACHI: Mehwish Hayat is not one to shy away from speaking up about issues faced by Muslims, particularly when it involves women.

Now, the Chhalawa star has added another feather to her cap after being chosen by international publication Muslim Vibe as one of the top Muslim women in the world who are breaking stereotypes and changing society.

The humanitarian was bestowed the honour on Women’s Equality Day, which commemorates the passage of the 19th Amendment to the US Constitution, granting the women the right to vote.  The top five Muslim women in the world mention was made in collaboration with British charity organisation Penny Appeal.

“I am so honoured to be chosen by the international magazine, Muslim Vibe, as one of the top five Muslim women in the world who are breaking stereotypes and changing the world.,” Hayat wrote in a tweet after receiving the honour. “To be thought of in the same breath as women I look up to is humbling.”

I am so honoured to be chosen by the international Magazine, "Muslim Vibe" as one of the top five Muslim women in the world who are breaking stereotypes and changing the world. To be thought of in the same breath as women I look up to is humbling https://t.co/3NUkAkIyQe

The publication mentioned Hayat as a “passionate and articulate” humanitarian who is making waves through her activism globally. “Mehwish has recently hit the headlines for advocating positivity and representation and peace in Pakistan,” Muslim Vibe wrote on her mention.

Bollywood could have used cinema to promote mutual understanding instead of vilifying us: Mehwish Hayat

Hayat has been quite vocal in her activism as of late. As well as speaking up on the atrocities taking place in Indian-occupied Kashmir (IoK), she was received her Pride of Performance award in Oslo recently. The actor then gave a heartfelt speech, which went viral, about Bollywood “vilifying” the Pakistani entertainment industry and called for a mutual understanding.

Bollywood could have used cinema to promote mutual understanding instead of vilifying us as they do. They need to decide which is more important – nationalistic fervour or a peaceful future . pic.twitter.com/EzcK4L0zWD

The use of cluster bombs in Kashmir is in clear violation of the Geneva Convention. There is no justification for it whatsoever. These are simple war crimes – the world has to wake up and put a stop to these atrocities NOW! #SaveKashmirSOS #KashmirBleeds

The star also commented upon divisive nationalism with a thought piece on BBC, emphasising the responsibility which actors and role models have to promote peace to become responsible humanitarians.

“My intention when speaking about women’s rights, girls’ education, or supporting humanitarian charity work is to unite people — not divide them,” she said during the interview.

So blessed to be able to continue to deliver our message on a world stage. Thank you @BBCWorld and @BBCNuala for having me on your prestigious impact programme . I hope my message of peace resonates where it matters . pic.twitter.com/2hMKg9zizF

Earlier this year, Hayat was honoured by the government with the Tamgha-e-Imtiaz, the highest accolade any citizen of Pakistan can receive.

With all this under her belt, she is now partnering with Penny Appeal and running in the London Marathon 2020 to help hundreds of Pakistani children get the education they deserve.