'Blue Jacket Moveme­nt' aims to shed light on the import­ance of cleanl­iness
By ​ Our Correspondent
Published: August 16, 2019
Tweet Email 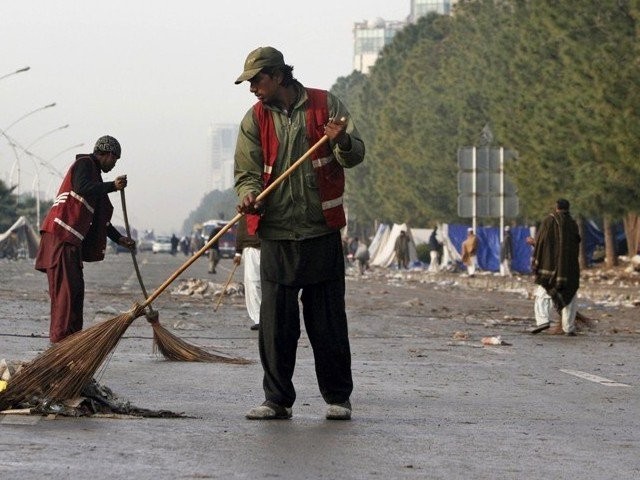 KARACHI: The Sindh government has decided to launch the `Blue Jacket Movement’, with the slogan `Say No To Open Littering’, under which an awareness drive would be kicked off in District South in the first phase, followed by other districts in subsequent phases. Simultaneously, cleanliness work would also be undertaken.

At the launch ceremony held on Wednesday night at Teen Talwar, the chief minister said that the government was an executing agency but the citizens have the responsibility to demonstrate civic sense by keeping their homes, compounds, neighbourhoods and streets clean. They must do so by disposing of the trash wrapped in paper bags into the dustbin and also monitoring the sweeping of streets, lifting of trash and other cleanliness work being done by the district municipal corporations and the Sindh Solid Waste Management Board.

Speaking about garbage collection, the CM asked citizens to keep a check on the DMCs and SSWMB staff responsible for collecting trash. In case of failure of the relevant DMCs and SSWMB staff, complaints may be lodged at their offices, he said. “I am also establishing a separate desk in the CM House Complaint Cell where complaints regarding non-sweeping and lifting of trash may be registered,” he added.

Speaking about the latest campaign, Shah said that his Adviser on Environment, Murtaza Wahab, had discussed the concept of Blue Jacket Movement with him. “I approved it there and then and directed him to start it from District South and then we would spread it in other districts of Karachi, then Hyderabad and all over Sindh,” he said, adding, “Cleanliness is one of the pillars of Islam and being a Muslim society, it becomes our utmost responsibility to keep ourselves and the areas we live in neat and clean.”

He said that under the Blue Jacket Movement, citizens of District South would be made aware of the importance of cleanliness. “We will select areas to make models in terms of cleanliness and beautification,” he said, adding that volunteers would work in their designated areas.

He deplored that his opponents were propagating that the government was not giving ownership to the city. but “we have proved that we have already given ownership to this city of the father of nation by launching development projects, widening its roads, re-designing its drainage system, dewatering the inundated areas and now have involved the district administration in the garbage lifting work,” he said, urging each and every individual to own the city and fulfill their responsibility by keeping it neat and clean.

Information Minister Ghani said that around 600 volunteers have got themselves registered in the Blue Jacket Movement. “This shows that people want to work for the betterment of the city but we have to just guide them, encourage them and work with them,” he said.

He added that the foundation of the Blue Jacket Movement has been laid in District South and within a few months, its scope would be spread to other districts of the city. He added that “this city does not belong to any individual, political party or group, but to each and every one of us and we have to own it.”

Local Government Minister Syed Nasir Shah told the chief minister that during the three days of Eidul Azha, over 1,459,167 offal of sacrificial animals has been lifted and transported to the designated landfill sites.

The report states that Sindh Solid Waste Management worked in three DMCs – East, West and South – from where they collected 42,937 tons of offal.

The chief minister also issued directives to start fumigation across the province, so that the spread of malaria and other diseases could be curbed.

CM Shah also appreciated the efforts of all the local bodies, the Karachi Water and Sewerage Board, WASA, HMC, divisional and district administration, police and other civic agencies for working round-the-clock during the heavy rains in Hyderabad and Karachi divisions. “You could not celebrate Eid with your families and kept serving in the field for which your spirit and dedication is highly appreciated,” said Shah.