Decisi­on made in the wake of increa­sing cases of typhoi­d in Sindh
By Tufail Ahmed
Published: August 16, 2019
Tweet Email 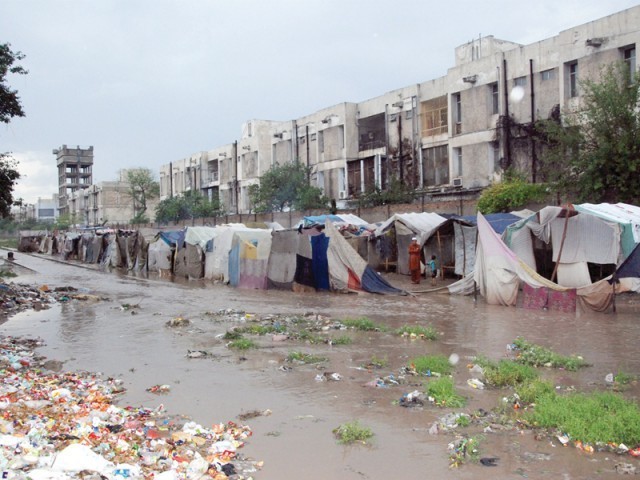 Waterborne diseases such as typhoid, cholera, malaria and cases of snakebite usually increase in monsoon due to stagnant water. Typhoid is responsible for nearly 12 million infections and between 128,000 and 161,000 deaths a year in typhoid-endemic countries. PHOTO: SAMEER RAZZIQ / FILE

KARACHI: For the very first time in its history, the Sindh government has decided to launch an anti-typhoid vaccination drive across the province, including Karachi. Typhoid-conjugated vaccine (TCV) will be included in the government’s existing Expanded Program on Immunisation (EPI) by the end of November this year.

In its initial stages, the anti-typhoid vaccine drive will begin in six districts of Karachi and Hyderabad and eight districts of Sindh. The protective vaccine will be administered to 1.1 million children aged nine months to 15 years.

Speaking to The Express Tribune, the provincial manager of the EPI, Dr Zahoor Baloch said that the vaccine drive will continue for three days throughout the province.

“Since anti-biotics have failed to deliver the desired results against typhoid in Pakistan, the government has decided to opt for TCV to address the issue,” Baloch said.

“The decision was based on recommendations from health experts and international institutions.”

He added that only a single dose of the vaccine will be administered to a 9-month-old child which will prevent the infection for a long time.

It is pertinent to mention here that the outbreak of the epidemic disease in several urban and rural parts of Sindh, including Karachi and Hyderabad, has raised concerns among health experts since the bacteria that causes typhoid has become resistant to antibiotics.

According to the World Health Organisation, typhoid is responsible for nearly 12 million infections and between 128,000 and 161,000 deaths a year in typhoid-endemic countries.

The disease disproportionally impacts young children and marginalised populations in much of Asia, sub-Saharan Africa, and parts of Latin America and the Middle East that often have outdated, inadequate, or unsafe water and sanitation systems.