The Hindu commun­ity of Khuzda­r also staged a rally in favour of Kashmi­r
By Mohammad Zafar
Published: August 15, 2019
Tweet Email 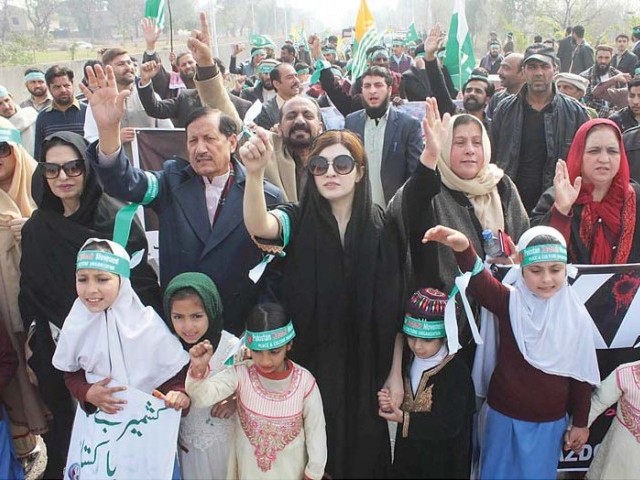 QUETTA  : Rallies were held in Quetta and other districts in Balochistan on the 14th of August to mark Independence Day celebrations and to show solidarity with the people of Indian Occupied Kashmir.

A rally was organized on Quetta’s outskirts in which hundreds of people carrying Pakistan and Kashmir flags participated. National anthems were played and participants chanted slogans of ‘Kashmir will become Pakistan’.

“The Pakistani nation stands firmly with the people of Kashmir against Indian oppression and warns India that its cruelty will result in its own destruction”, warned the participants. The rally later ended at Hanna Cross where a public gathering was held and leaders addressed the participants.

Another rally led by Balochistan Home Minister Mir Zia Langove began in Kalat district and, upon reaching Quetta, joined a public gathering at the Hockey Chowk, It travelled through Mastung, with participants raising pro-Pakistan, pro-Kashmir and anti-India slogans.

Member of National Assembly (MNA) Nawabzada Shahzain Bugti also led a rally from the Sangsela Morr to the Deputy Commissioner’s House to pay tribute to the Kashmiri people’s struggle.

Furthermore, Member of Provincial Assembly (MPA) Younis Zehri also attended a Kashmir Solidarity rally in Khuzdar which began at the Deputy Commissioner’s office and ended at the Kalat Division Commissioner’s office, with hundreds of people gathering to show their enthusiasm on Independence Day and express solidarity with Kashmir.

The Hindu community of Khuzdar also staged a rally in favour of Kashmir and condemned the actions of Indian forces in Kashmir.

A number of people from different walks of life also participated in yet another Independence Day rally held in Hub city which was attended by a large number of people holding Pakistan and Kashmir flags.