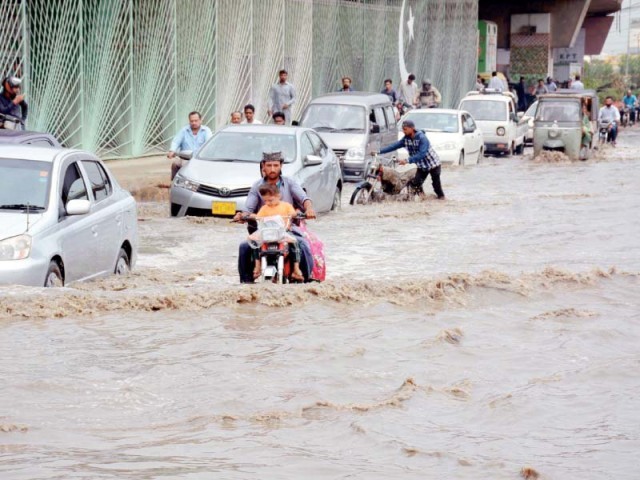 HYDERABAD / KARACHI: The heavens opened again during the second spell of the monsoon rains in the province on Saturday with at least 10 deaths from rain-related incidents reported from different districts. The Pakistan Meteorological Department (PMD) recorded by 6pm 62 millimetre rain in Islamkot and 51mm in Nangarparkar talukas of Tharparkar, 23mm in Nawabshah, 17mm in Thatta, 13mm in Larkana, 12mm in Hyderabad and 11mm in Dadu district.

Three men died due to electrocution in Hyderabad and Jamshoro while a man was struck by lightning in Mirpurkhas district. Besides, a young man electrocuted to death on Press Club Road in Badin district. Two sisters drowned in a rainwater stream in Islamkot, Tharparkar. Two persons were injured when the roof of a house in Heerabad, Hyderabad collapsed during the rain.

However, the spokesman of Hyderabad Electric Supply Company (HESCO) Sadiq Kubar claimed that the power supply to 89 out of 526 electric feeders in the region has been suspended due to thunderstorm and rain for safety reason. According to him, 30 of these 89 feeders are in Hyderabad district. Kubar told that 18 electric polls have fallen in Mirpurkhas and Umerkot districts due to blustery winds.

The family said the SDO had given the transformer for repair to the private technician Badar Muneer Soomro who later sent Rind to fix the repaired transformer. In a separate incident in Tando Jam town of Hyderabad, a 21-year-old factory worker died of electrocution while working in a factory in Engineering Workshop Colony on Saturday.

The low lying areas of Hyderabad’s Qasimabad taluka which were already fighting to drain rainwater after July 29 torrential cloudburst was partially submerged again after Saturday’s rain. The deputy commissioner Hyderabad Syed Aijaz Ali Shah at a press conference on Saturday blamed HESCO, Hyderabad Development Authority (HDA) and Water and Sanitation Agency (WASA) for the travails of submersion, water shortage and power outages suffered by the citizens.

“We have succeeded to drain out 80% rainwater from Hyderabad,” the DC said referring to the submersion of a large number of localities after July 29 showers of rain. Shah said that 55 pumping stations of WASA are operating in Hyderabad, adding that all of them are equipped with the power generators. “But during the power outage, the stations’ capacity reduces by 75%.” The DC claimed that 315 de-watering pumps have been provided in the inundated localities of Hyderabad to drain out the sewage-mixed rainwater. Meanwhile, the rainfall adversely affected the cattle markets as well. Irfan Qureshi, who is operating a cattle market near Cant graveyard in Hyderabad, told that the cattle owners have spent millions of rupees on buying sand to level the swampy ground.

“We feel compelled to sell our cattle at lower rates because the market is slow and the rain has aggravated the problems,” said Shahid Qureshi, a cattle trader. Anwar Soomro, a cattle herder from Nawabshah who brought his goats for sale in Hyderabad, said he and other herders like him are selling the sacrificial animals at a throwaway price.

“All year long we breed animals and wait for Eidul Azha to make some money by selling them. Now we can’t afford to pay for the transport to take the animals back to our villages.” Faizan Ali, a buyer, told that he and his friends bought eight goats for Rs125,000. “The one with the lightest weight weighs around 20 kilograms,” tells the happy buyer.

Different areas of the city witnessed moderate to heavy rainfall on Saturday as the second spell of monsoon rain hit the city. The heaviest rainfall was recorded in Landhi at 36 millimetres while the lowest was recorded in Gulshan-e-Hadid at 4mm. According to the weather alert issued by the Pakistan Meteorological Department (PMD), this spell of rain is expected to continue till Monday.

The city was hit by scattered showered on Saturday due to the depression formed in the Bay of Bengal. Heavy rainfall with scattered thunderstorms is expected today (Sunday) as well. Rainwater submerged roads in Qayumabad, FTC, Moinabad, Malir, Nazimabad and some roads and streets in the densely populated areas of the old city. Some low-lying areas in East district were also submerged in rainwater while teams of the Karachi Metropolitan Corporation and district municipal corporations made efforts to drain the water.

The monsoon rains which began on July 15 are expected to continue till September 15 with several more spells of rain expected in the city.