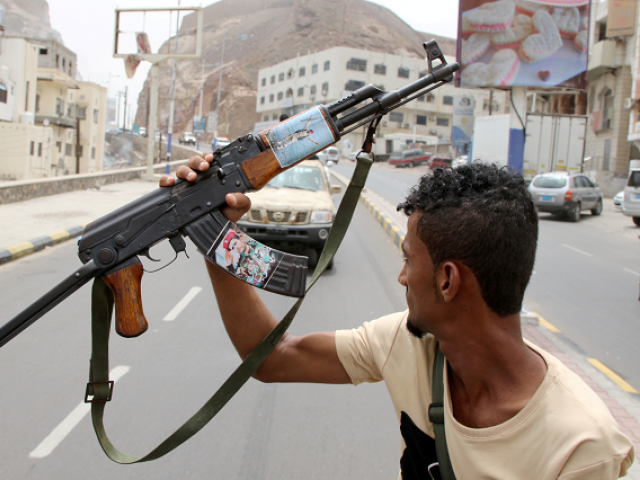 A member of Yemen's southern separatist holds his weapon with a picture of Muneer al-Yafee during a funeral of Brigadier General Muneer al-Yafee and his comrades killed in a Houthi missile attack, in Aden, Yemen, August 7, 2019. PHOTO: REUTERS

ADEN: Fierce clashes resumed on Saturday in Yemen’s southern port of Aden between nominally allied forces that have turned on each other, exposing rifts in a pro-government military coalition and complicating UN efforts to end the country’s war.

At least eight civilians were killed on Friday in Aden, the temporary seat of Yemen’s internationally-recognised government, amid fighting between southern separatists and government forces, medical sources said. Both are part of the Saudi-led coalition fighting the Iran-aligned Houthi movement in Yemen.

Residents said battles resumed at dawn near the all-but empty presidential palace in the predominantly residential Crater district, near Aden International Airport and in a neighborhood where the interior minister lives.

Sources told Reuters the minister, Ahmed al-Mayssari, left his home during a lull in fighting the previous night.

The clashes began on Wednesday after the separatists accused a militant party allied to President Abd-Rabbu Hadi of complicity in a missile attack that week on a military parade, one of three separate attacks that targeted southern forces.

The separatists and Hadi’s government are nominally united in their battle against the Houthi movement that ousted Hadi from power in the capital Sanaa in late 2014, but they have rival agendas for Yemen’s future.

UN Secretary-General Antonio Guterres on Saturday urged the parties to cease hostilities. The United Nations is trying to de-escalate tensions to pave the way for wider political talks to end a war that has killed tens of thousands and pushed Yemen to the brink of famine.

Separately, the Houthis’ Al-Masirah TV quoted a military spokesperson for the group as saying it had launched a drone attack against Saudi Arabia’s Abha airport, targeting the fuel depot and control tower.