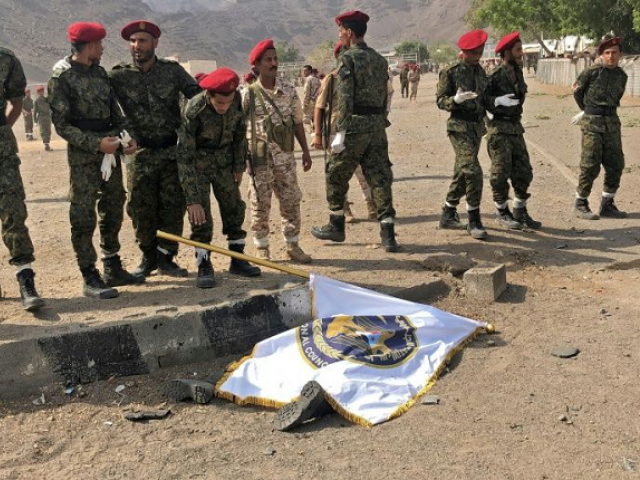 A parade was under way at the military camp west of Yemen's government-held second city Aden, when it came under rebel missile and drone attack leaving at least 17 officers dead and scores wounded. PHOTO: AFP

The fighting flared on Wednesday between loyalist forces and the Security Belt force, which is backed by the United Arab Emirates.

The latter nominally supports Yemen’s internationally recognised government, but is dominated by fighters who seek an independent southern Yemen.

Residents told AFP the roads were empty of traffic and that mortars had fallen on residential areas.

In a statement carried by the official Saba news agency, the government on Thursday blamed the secessionist Southern Transitional Council for “the armed escalation… and its dire consequences, which threaten the security and safety of residents” and Aden’s stability.

It called on the UAE and Saudi Arabia, which leads a military coalition backing the government against Huthi rebels, to “exert urgent and strong pressure on the Transitional Council to prevent any military manoeuvres in the city”.

It also called for all armed forces to be incorporated into the state’s security apparatus.

Wednesday’s fighting killed two Security Belt fighters and followed a deadly attack against the force last week, which was claimed by Huthi rebels who hail from northern Yemen.

The United Nations human rights office has since accused the Security Belt force of “reportedly carrying out and enabling retaliatory attacks against civilians” from northern Yemen.

More than four years since the Saudi-led intervention to prop up Hadi’s government in the face of a Huthi uprising, the Iran-linked rebels remain in control of large parts of northern and western Yemen including the capital Sanaa.

The south is largely controlled by loyalist forces.

Southern Yemen was an independent state until 1990 and the north is perceived to have imposed unification by force.