Civili­ans among scores of people wounde­d in the attack­s
By AFP
Published: August 1, 2019
Tweet Email 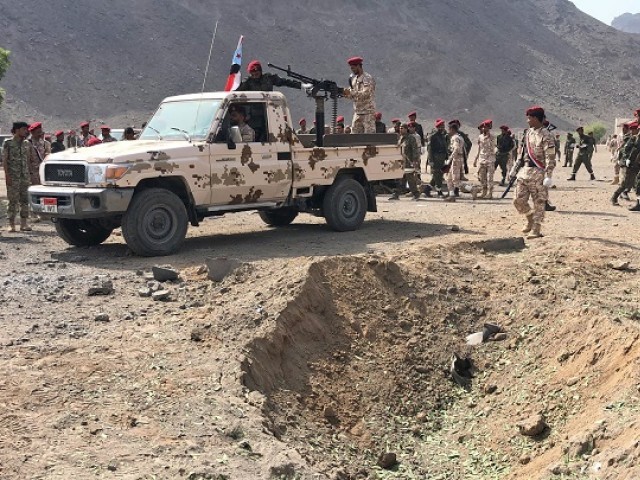 Yemeni security forces gather at the scene of a missile attack on a military camp west of Yemen's government-held second city Aden, on August 1, 2019. PHOTO: AFP

DUBAI,: Two separate attacks killed at least 20 police in Yemen’s government-held second city Aden on Thursday, one by rebels and the other by militants, security and medical sources said.

Civilians were among scores of people wounded in the two attacks which targeted the United Arab Emirates-backed police and shattered a year of relative calm in the southern port city.

The first attack was a suicide car bombing carried out by militants on a police station, which killed three officers and wounded at least 20 others, including civilians, a security source said.

The second attack was carried out by the Houthi rebels, who used a drone and a ballistic missile to target a parade in a police camp west of Aden and killed 17 officers and wounded scores more, medical sources and the rebels said.

The suicide bombing targeted policemen who were gathering early in the morning at the entrance of a police station in Aden’s Sheikh Othman area.

“Tens of wounded were hospitalised at Aden surgical hospital after an explosion in the surrounding area,” Doctors Without Borders said on Twitter.

The Houthi rebels said the attack on al Jala Camp, about 20 kilometres west of Aden, was carried out with a drone and a ballistic missile. 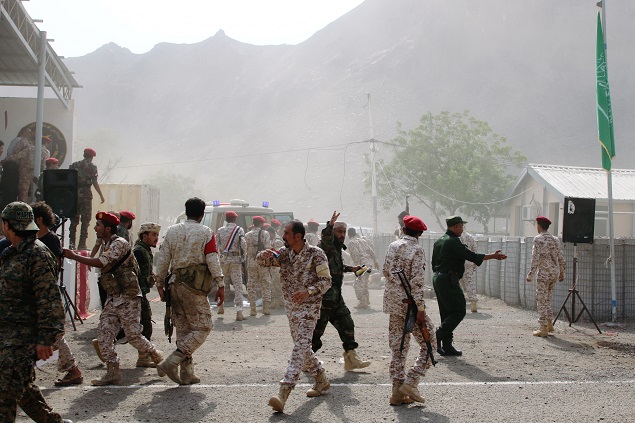 Soldiers rush to help the injured following a missile attack on a military parade during a graduation ceremony for newly recruited troopers in Aden, Yemen. PHOTO: REUTERS

Aden is controlled by the Yemeni government and its supporters in a Saudi-led coalition, who have been fighting the Houthi rebels since 2015.

But it also hosts al Qaeda and the Islamic State group, who have claimed a number of attacks in the city in recent years.

In February last year, twin suicide bombings claimed by IS hit a base of an Aden counter-terrorism unit, killing five people, including a child.

Five months later, two people were killed when an attacker blew himself in the city.

The government established its headquarters in Aden after the rebels forced it out of the capital Sanaa in 2015.

In January last year, the city was rocked by deadly clashes that saw southern separatists seize much of it from other pro-government forces.

A former British colony and protectorate, South Yemen was an independent country until it merged with the north in 1990.

The two sides fought a devastating civil war four years later that culminated in northern forces occupying the south. sowing grievances that persist to this day.

The UAE is a key partner in the Saudi-led coalition which has enforced an air and sea blockade on rebel-held areas and carried out a controversial bombing campaign that has exacted a heavy civilian death toll.

In recent months, the rebels have hit back with missile and drone attacks targeting neighbouring Saudi Arabia.

Several rounds of UN-brokered talks, including an accord reached in Stockholm in December, have failed to end the fighting.

The conflict has killed or wounded tens of thousands of people and resulted in the world’s worst humanitarian crisis, according to the United Nations.

An estimated 24 million Yemenis — more than 80 per cent of the population — depend on some form of humanitarian assistance for survival, UN agencies say.