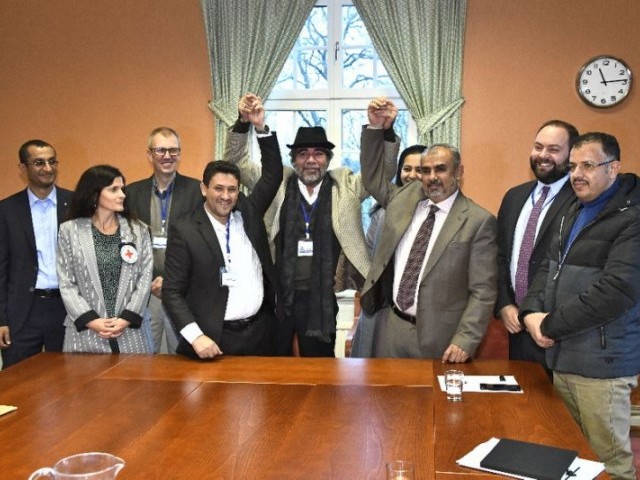 Representatives of the Huthi rebel delegation (L) and of the Yemeni government's delegation (R) posed for a picture with UN delegates. PHOTO: AFP

RIMBO (SWEDEN): Yemen’s government and rival rebels agreed Tuesday on a mass prisoner swap, exchanging more than 15,000 names, but warned that talks this week were unlikely to yield a truce.

Nearly four years into a war that has pushed 14 million Yemenis to the brink of mass starvation, the Saudi-backed government of Abedrabbo Mansour Hadi and Huthi rebels, linked to Riyadh’s arch-rival Iran, have been in UN-brokered talks since Thursday in the rural town of Rimbo in Sweden.

Mediators are pushing for a de-escalation of violence in two flashpoint cities: rebel-held Hodeida, a port city vital to the delivery of humanitarian aid, and Taiz, Yemen’s third largest city, scene of some of the most intense fighting of the war.

The rival parties have not yet agreed to UN proposed drafts on the two cities, which include the de-escalation of hostilities.

While the Sweden talks do not aim to broker an official ceasefire, a UN official on Tuesday confirmed a draft for a full “political framework” had been submitted to both parties. The official declined to give further detail.

The Sweden talks are the first meeting between the two parties in the Yemen conflict in more than two years.

The last round of talks, in 2016, collapsed after more than three months of negotiations.

Brokered by UN special envoy Martin Griffiths earlier this month, the prisoner swap was one of the main points — and the least contentious — at this week’s talks.

It is the largest prisoner exchange between the rival parties since the outbreak of the conflict between the rebels and the government, backed since 2015 by a military coalition led by Saudi Arabia and the UAE.

Askar Zaeel, a government negotiator on the prisoner swap, said the rebels had named 7,487 detainees whom they were willing to release. The government named 8,576 detainees, Zaeel said.

Rebel negotiator Abdelkader Mourtada confirmed a total of more than 15,000 prisoners and detainees had been named in the swap, including UAE and Saudi citizens. He did not give further details.

Zaeel told AFP the government demanded that the rebels hand over the body of Ali Abdullah Saleh, Yemen’s former president who was killed at the hands of the Huthis after he broke a fragile alliance with the rebels to re-align with Saudi Arabia.

Both parties said the exchange should be complete by January, pending final revisions of the lists.

The International Committee of the Red Cross has confirmed it will oversee the exchange.

The government on Tuesday ruled out a truce, one day after the Saudi-led coalition said military operations were ongoing in Hodeida.

The government alliance launched an offensive to retake the rebel-held city in June, sparking an international outcry over the fate of its 600,000 residents and a port crucial for food imports.

“This has been proposed as part of the general framework, and this is what we came to make progress on: a full, complete ceasefire. But I think we will be unable to achieve this progress in this round,” Zaeel told AFP.

“This is a round of talks to prepare for that.”

More than 10,000 people have been killed since Saudi Arabia and its allies joined the government’s war against the Huthis, triggering what the UN calls the world’s worst humanitarian crisis.

Both parties stand accused of failing to protect civilians. The Saudi-led alliance has been blacklisted by the UN for the killing and maiming of children.

The talks are scheduled to end Thursday, with another round tentatively scheduled for early next year, according to the UN official.