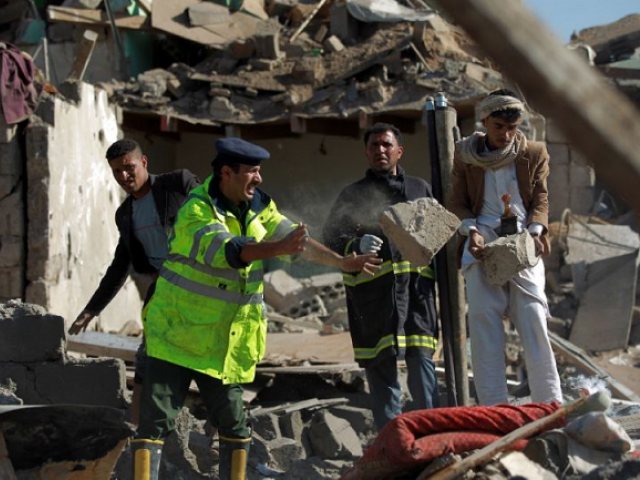 Yemeni security forces look for survivors under the rubble of houses destroyed by Saudi air strikes against Huthi rebels near Sanaa Airport on March 26, 2015. PHOTO: AFP

TEHRAN: Iran condemned as a “crime” on Friday a wave of air strikes led by its arch rival Saudi Arabia on rebel-held areas of Yemen.

The Thursday strikes followed a rebel drone attack that closed one of the kingdom’s main oil pipelines earlier this week and that Riyadh said was carried out on Tehran’s orders.

“We call on the international community and human rights groups to act on their commitments and stop such crimes from happening again by any means possible,” Iranian foreign ministry spokesperson Seyed Abbas Mousavi said.

“Countries supporting the aggressor forces in Yemen by providing weapons and bombs to the coalition have a shared responsibility for this crime and must be held accountable,” he added in a statement on Telegram.

Mousavi did not comment on Riyadh’s allegation that Tehran was behind Tuesday’s rebel attack on the Saudi pipeline.

The UN’s humanitarian office OCHA said later that five children had been killed and 16 wounded in the strikes.

The coalition intervened in Yemen in March 2015 when President Abedrabbo Mansour Hadi fled into Saudi exile as the rebels were poised to take his last toehold Aden after overrunning most of the rest of the country.

Its air campaign on rebel-held areas has been repeatedly criticised by the United Nations and human rights groups for its high civilian death toll.