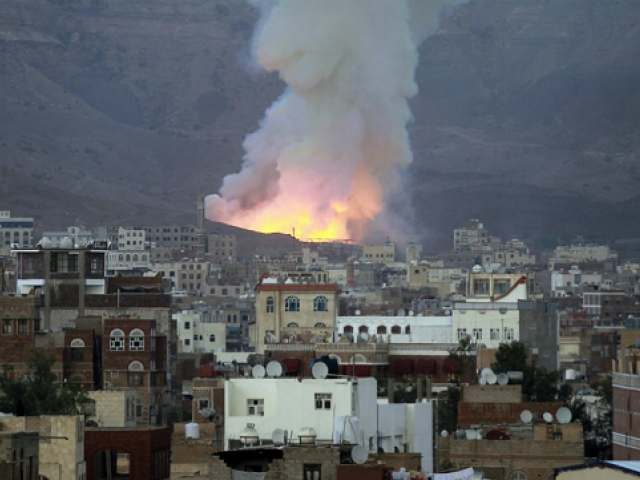 SANAA: Warplanes struck in and around the rebel-held Yemeni capital on Thursday two days after the insurgents claimed drone strikes that shut a key oil pipeline in neighbouring Saudi Arabia, the rebels and witnesses said.

One witness told AFP he heard a loud explosion in the heart of Sanaa.

The rebels’ Al-Masirah television blamed “aircraft of the (Saudi-led) aggression”.

In an initial tweet, the broadcaster reported six strikes on the Arhab district of Sanaa province. It then reported further strikes, including one in Sanaa itself.

A second witness told AFP that the raids began around 8 am (0500 GMT) while many Yemenis were asleep awaiting the end at sunset of the daytime fast observed by Muslims during the holy month of Ramadan.

“There were many strikes,” he added.

On Tuesday, the Huthi rebels claimed responsibility for twin drone strikes on Saudi Arabia’s main east-west oil pipeline, saying that they were a response to “crimes” committed by Riyadh during the bloody air war it has led in Yemen since March 2015.

The pipeline, which can carry five million barrels of crude per day, provides a strategic alternative route for Saudi exports if the shipping lane from the Gulf through the Strait of Hormuz is closed.

Iran has repeatedly threatened to close the vital conduit for global oil supplies in case of a military confrontation with the United States.

The Saudi cabinet called on Wednesday for “confronting terrorist entities which carry out such sabotage acts, including the Iran-backed Huthi militias in Yemen.”

“We will retaliate and we will retaliate hard when we see Huthis hitting civilian targets like what happened in Saudi Arabia,” the UAE minister of state for foreign affairs, Anwar Gargash, said on Wednesday.

Saudi Arabia and its allies intervened in Yemen when President Abedrabbo Mansour Hadi fled into Saudi exile as the rebels closed in on his last refuge in Yemen’s second city Aden after sweeping through most of the rest of the country.

The intervention has retaken much of the south but the capital and most of the populous central highlands remain in rebel hands.

The Saudi-led coalition backing the Yemeni government confirmed that its warplanes were bombing rebel targets on Thursday following rebel drone attacks that closed a Saudi pipeline.

“We have begun to launch air strikes targeting sites operated by the Huthi militia, including in Sanaa,” a coalition official, who declined to be identified, told AFP.