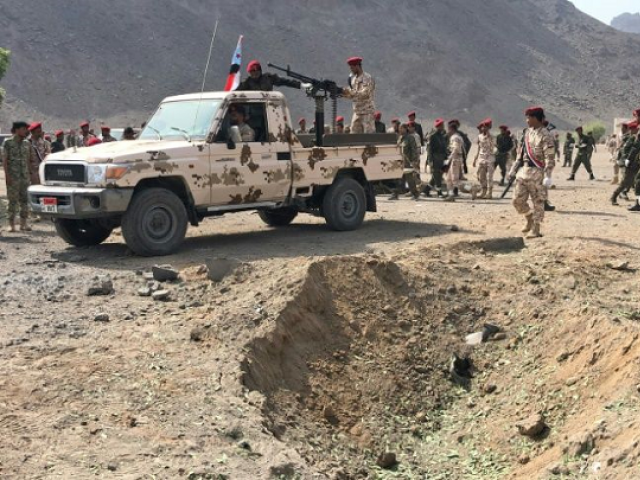 Yemen has been wracked by a bloody conflict between the government and rebels with militants taking advantage of the chaos to launch deadly attacks. PHOTO: AFP

ADEN: Al-Qaeda gunmen killed 19 soldiers in an attack on an army base in southern Yemen on Friday, security officials said, a day after deadly assaults by rebels and a militant bomber.

The gunmen stormed Al-Mahfad base in Abyan province and remained inside for several hours before military reinforcements came, three security officials told AFP, adding that the soldiers were killed in clashes with the militants.

“The Qaeda gunmen took advantage of what happened (Thursday) in Aden and launched an assault on Al-Mahfad base and clashed with soldiers,” a government security official said.

“Military reinforcements were sent… and the gunmen were killed while others were driven out with air support from the (Saudi-led) coalition, in an operation that lasted hours,” the official said.

“At least 19 soldiers were killed and others wounded.”

The other two officials confirmed both the details and the death toll.

In a statement, the militant group said it had “blown up” buildings inside the base and “withdrew safely”, but did not claim a death toll for that operation.

“Al-Qaeda has neither the capability nor the strategic appetite to open a new front in south Yemen,” Mitreski, a researcher at the University of Sydney, told AFP.

“We may see other sporadic attacks in the future motivated by Al-Qaeda’s desire to remain a relevant actor in the Yemeni conflict.”

AQAP, the Islamic State group and other militants have flourished in the chaos of the war between Yemen’s Saudi-backed government and the Iran-aligned Huthi rebels.

The United States considers AQAP the global militant network’s most dangerous branch and has waged a long-running drone war against its leaders.

The first attack on Thursday was a suicide car bombing carried out by militants on a police station that killed 13 police officers and wounded several others, a security source said.

The second was carried out by the Huthis, who said they launched a drone and a ballistic missile at a training camp west of Aden that killed dozens.

The aerial attack hit as senior commanders were overseeing a passing out parade for newly graduated cadets at Al-Jala Camp, 20 kilometres (13 miles) from the centre of Aden.

The missile struck about five metres (yards) from the viewing platform and a senior commander was among the dead, an AFP photographer reported.

Aden is controlled by Yemen’s internationally recognised government and its supporters in the Saudi-led military coalition, which has been fighting the rebels since 2015.

The Islamic State group said it was responsible for the suicide bombing on the police station, in a statement on the Telegram messaging app.

The Yemeni government said on Thursday the “source and purpose (of the attacks) were the same”.

“The two attacks prove the Huthi militia rebels and other terrorist groups are sharing roles and complementing each other in a war against the Yemeni people,” a statement said.

A Huthi rebel spokesperson told AFP that Thursday’s attack was an “intelligence operation” in which “a new kind of missile that we have not unveiled was used as well as a drone that provided support in a big way.”

In recent months, the rebels have hit back with missile and drone attacks targeting neighbouring Saudi Arabia.

Repeated UN peace efforts, including an accord reached in Sweden in December, have failed to end the fighting.

The conflict has killed and wounded tens of thousands of people and resulted in the world’s worst humanitarian crisis, according to the United Nations.

“I call on parties to honour their commitment to peace and put more efforts towards a political solution to the conflict,” he tweeted.

US policeman suspended over choking death of black man