The Indian govern­ment has admitt­ed that 10,000 extra troops were sent to occupi­ed Kashmi­r a week ago
By AFP
Published: August 3, 2019
Tweet Email 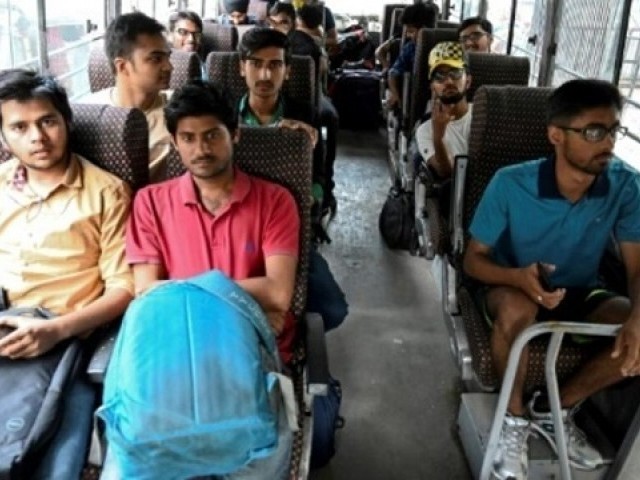 Hundreds of Indian students from outside Kashmir were evacuated in buses. PHOTO: AFP

SRINAGAR, INDIA: Thousands of tourists and students scrambled to get places on planes and buses leaving occupied Kashmir on Saturday after the Indian government warned of the threat of ‘terror’ attacks.

Thousands of military reinforcements were arriving in occupied Kashmir.

IoK state government said late Friday that tourists should leave ‘immediately’ because of new intelligence about “terror threats” to a major Hindu pilgrimage in the region.

Anxious tourists, including some foreigners, flooded the airport at the main city, Srinagar, on Saturday, many without tickets for flights that day.

Visitor numbers have been boosted by the Amarnath Yatra pilgrimage, which draws hundreds of thousands of Hindus each year.

The pilgrimage has been cancelled because of the scare. A huge security force had been guarding the route even before the alert. A second smaller pilgrimage, the Machail Mata Yatra, in Jammu region was also cancelled Saturday.

“Passengers who were scheduled to return in coming days have turned up in panic at the airport today,” said the manager of one airline operating the Delhi-Srinagar route.

“It’s chaotic and not many will manage seats unless there are additional flights.”

Hundreds of Indian students from outside Kashmir were evacuated in buses.

“All the non-local students have left the campus for their respective states,” an administrative official at the National Institute of Technology in Srinagar said.

The Indian government has admitted that 10,000 extra troops were sent to occupied Kashmir a week ago. Media reports Friday said a further 25,000 had been ordered there.

The Indian government declined to say how many are in the new reinforcements.

While military authorities and the state government highlighted the security risk, Kashmir politicians have raised fears that the troops are sign that the Hindu nationalist government could carry out a threat to scrap Kashmir’s special status under the Constitution.

Political leaders in the territory have warned that cancelling constitutionally guaranteed rights, which mean only state domiciles can buy land in the region, could spark unrest.

Jammu and Kashmir governor Satya Pal Malik, who is named by the New Delhi government, said “unnecessary panic” was being created by “rumours”.

Prime Minister Narendra Modi’s government has refused to say whether it is about to scrap the constitutional article, though he has often spoken against it.