Expert­s estima­te that around 100,000 trees can be plante­d along the belt of the river, which can improv­e enviro­nment
By Aftab Khan
Published: July 26, 2019
Tweet Email 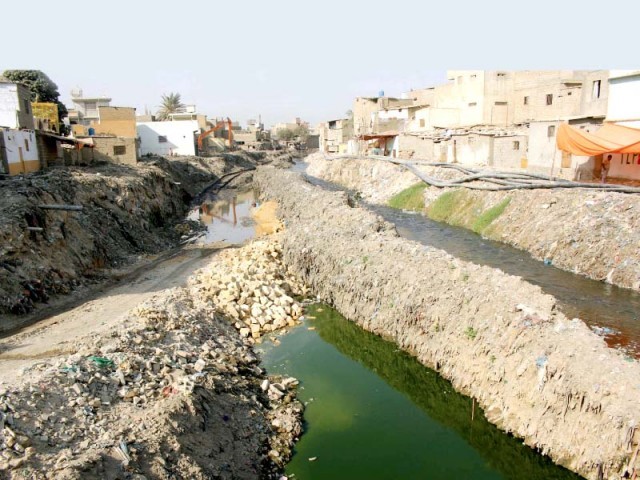 KARACHI: Once comprising streets lined with lush green trees of neem, almond, plums and mangos, Karachi has now turned into a jungle of concrete. With the city’s foliage replaced by bricks and mortar, its beauty is lost behind harsh angular structures that do little to add to the appeal of the metropolis and keep its temperature moderate.

Amid growing concerns over rapidly disappearing foliage from Karachi and its impact, ecologists and environmentalists suggest planting trees along the banks of Lyari River to limit, and even reverse, the damage caused to the city’s environment.  Presence of a large water body nearby and availability of natural manure from the river will result in trees growing faster, they opine.

According to World Wildlife Fund Technical Director Muazzam Khan, Lyari River can be a good source of water to increase plantation in the city, which will in turn help improve biodiversity, particularly providing habitats for birds. However, only trees that are compatible with the environment and atmosphere of Karachi, including banyans, peepal, mango, almond and coconut trees, are to be planted, he says, adding that these fruit-bearing trees will also help bring in foreign exchange.

It is estimated that around 100,000 trees can be planted along the banks of Lyari River. According to environmentalists, if the initiative to plant trees on a large scale along Lyrai River banks is taken by the government, the environment of Karachi can improve to a great extent.

Additionally, they also emphasise on the benefits if neem tree for keeping the temperature moderate. According to a research, temperature under neem trees remains three to four degrees lower than the average temperature of the city. A neem plant cost as little as Rs40 to Rs50 and if panted in large numbers, the citizens of Karachi would be able to benefit from their positive effect on the environment within three years, experts say.

Besides Lyari River, environmentalists also suggest planting trees along the banks of Malir River and in other areas of the city, which will further help increase rainfall and keep the temperature moderate.

Lyari River passes through the middle of the city, with Lyari Expressway built on its either side. Khan recalls that it used to serve as a breeding site for vultures during 1960s, due to the abundance of trees in the area. However, vultures have now become extinct in the city as their natural habitat is lost, he says.

A variety of bird species, including vultures, may return to Karachi if steps are taken to plant trees, a natural abode for birds, says Khan.