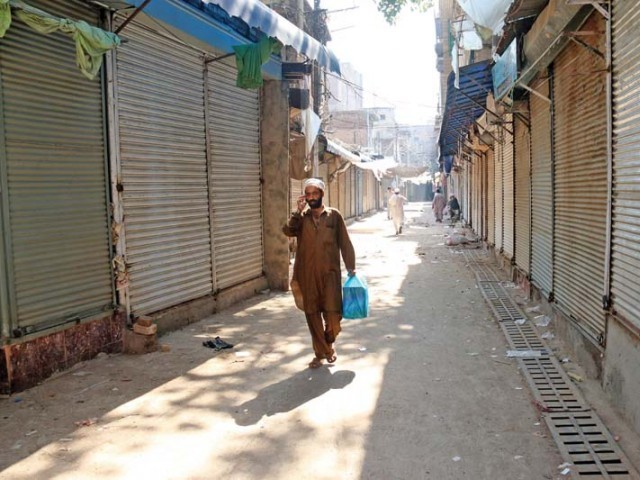 KARACHI: Traders in Karachi observed a strike on Saturday to protest against high taxes imposed in the budget for 2019-2020. The business community was divided on the strike. As a result, only 60% to 70% of the markets and trade centres remained closed.

A large number of workers who earn wages on a daily basis were deprived of their income for the day.

Additionally, traders of fabrics, cereals, spices, chemicals, spare parts and crockery faced difficulty and had to return home since the markets were closed.

Fortunately, no unpleasant incident occurred and the protest was peaceful. The life of citizens continued without disruptions and they went to work in offices and factories without any inconvenience.

The Sindh Minister for Transport, Awais Qadir Shah, expressed support for the strike and demanded of the Centre to remove new taxes imposed on traders as well as conditions applied on businesses.

“The imposition of new taxes has brought about a tsunami of inflation in the country, which has forced many traders to close down their businesses,” Shah said.

He warned that if the federal government pays no heed to the demands of protesting traders, inflation in the country would rise further.

He said that the imposition of new taxes has made it extremely difficult to run businesses in Pakistan.

The Sindh government supports traders in their stance, he added.

Shah also questioned the Centre’s policy of taking loans while increasing taxes at the same time. Criticising the federal government for its economic policies, he remarked that continuing with the current policies and increasing taxes will lead to economy’s death.