Many major market­s of Karach­i, other cities remain closed­
By Our Correspondents
Published: July 13, 2019
Tweet Email 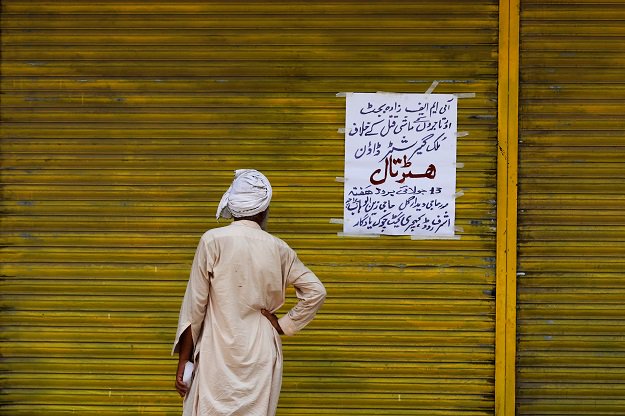 A worker reads a sign on a closed shop in Peshawar during a shutter down strike called by the traders and business community against what they say is a harsh federal budget for the fiscal year 2019-20. The sign reads in Urdu: "Countrywide shutter down strike against the IMF sponsored budget and economic murder of businessmen". PHOTO: REUTERS

KARACHI: Pakistan’s economy on Saturday suffered an estimated loss of around Rs20-25 billion due to partial shutters-down strike observed  by small businessmen and traders nationwide to press the federal government to withdraw its ‘anti-business’ measures implemented through budget 2019-20.

“Traders’ turnover stands at around Rs50 billion in a day nationwide,” All Karachi Tajir Ittehad Chairman Atiq Mir said while talking to The Express Tribune. Federal Minister for Economic Affairs Hammad Azhar said in a tweet that the share of retail sector in Gross Domestic Product (GDP) stands at around 20%.

Rough calculations based on Azhar’s tweet suggest retailers do businesses worth around Rs30 billion a day. Trader of Karachi – which plays a crucial role in importing raw material and finished goods and supplying them throughout the domestic economy – observed partial strike after a section of traders claiming success in second round of negotiations with the government resumed business on Saturday.

The country’s single largest wholesale market, Jodia Bazaar, and other markets including Sher Shah Scrap Market, timber, steel, cloth, sports markets, Light House in the old city area and markets Bahadurabad observed no or partial strike after their representative trade bodies claimed success in second round of talks with the Federal Board of Revenue (FBR) Chairman Shabbar Zaidi and his team.

They observed strike after their negotiations with Prime Minster Imran Khan and his economic team – including adviser to PM on Finance Hafeez Shaikh and the FBR chairman – failed on Wednesday.

They demanded that the government withdraw conditions on traders of collecting a copy of Computerised National Identity Card (CNIC) from buyers making purchase worth over Rs50,000 in a day and withdraw 17% sales tax imposed up on them through budget 2019-20.

They also demanded that sales tax should be collected from traders with annual revenue of over Rs20 million instead of Rs5 million; the FBR teams do not visit traders for audit; turnover tax be reduced to 0.5% from 2.5%; the exemption of income tax at an income of up to Rs1.2 million a year be restored and that traders be excluded from documenting their businesses for the time being.

Mir said traders presented some 32 demands before the government.Our C