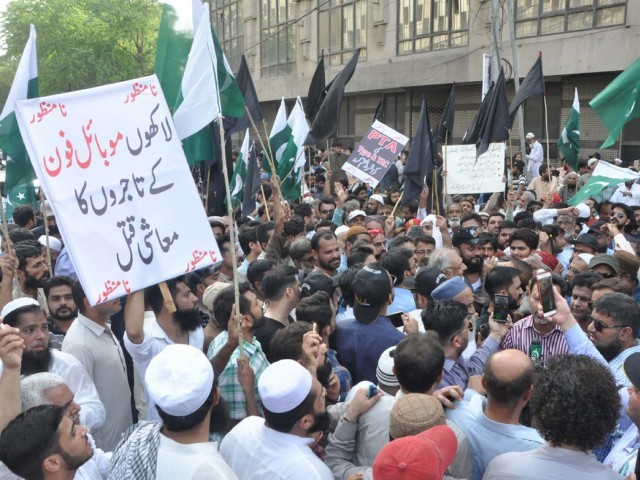 KARACHI: The Karachi-based businessmen and traders have given 72-hour ultimatum to the federal government to withdraw what they call the International Monetary Fund (IMF) dictated anti-business federal budget.

“We will observe a shutters-down strike if the government does not withdraw the budget by July 5,” All Karachi Tajir Ittehad Chairman Atiq Mir said on Tuesday while addressing thousands of participants of protest rallies that marched through various streets of Karachi ad gathered at the Karachi Press Club.

All Karachi Tajir Ittehad is a grand alliance of some 600 small and big markets in the city.

“These are the three basic demands. If the government fulfilled them in the next 72-hours, the businessmen and traders would call off the strike,” he said.

Apart from these three key demand, the traders’ list of 30-35 demands include withdrawal of increase in tariffs for power and gas utilities; revising down key interest rate to make banking credit affordable to traders and to stop free-fall of rupee against the US dollars.

At a separate press conference, the Automotive Importers and Dealers Association also issued a 24-hour ultimatum to the government to withdraw a 400% increase in rate of withholding tax on cars registration. Otherwise, they said, they would go for nationwide shutters-down strike.

Earlier, the textile processing mills, CNG dealers association and cement dealers also called upon the federal government to withdrawn increased rate of taxes and threatened to close their businesses in protest of the anti-business budget for the fiscal year that started on July 1, 2019.

A convention of hundreds of the businessmen – held in Multan on Sunday (June 30) – has already issued a 7-day ultimatum to the government to withdraw the anti-business budget.

“Zaidi has assured me on phone to address businessmen and traders’ issues. He assured me to replace the 17% sales tax with a fixed levy on traders and that the FBR teams would not visit traders. We would wait till Friday for implementation of the promises Zaidi made,” he said.

He, however, expressed hope that the FBR would address traders’ issues before the ultimatum ends. He said if the FBR fails to fulfill the promises they would hold protest rallies nationwide and close down markets for an indefinite period of time.

Muttahida Quami Movement (MQM) disgruntled leader Farooq Sattar also addressed the rally. He urged the Karachi-based lawmakers in the provincial assembly to play their role in helping businessmen and traders getting their issues resolved.