They have to spend money on basic facili­ties like water, which is unavai­lable at the market­
By Our Correspondent
Published: July 8, 2019
Tweet Email 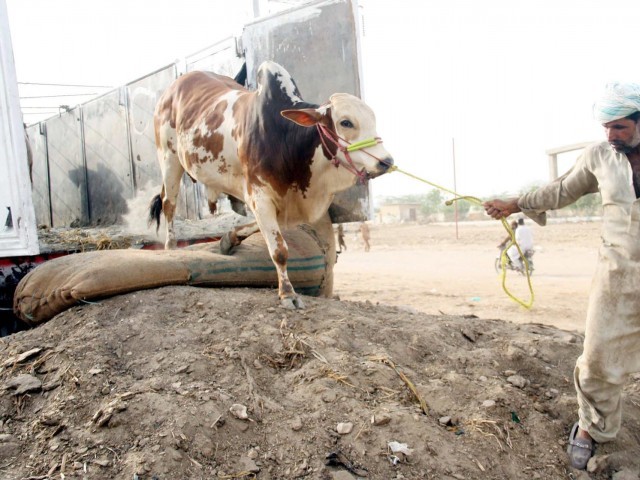 KARACHI: Cattle and their owners have flocked to Super Highway where Asia’s largest makeshift cattle market has been set up as Eidul Azha draws near. However, lack of facilities in the market has put a damper on the expectations of cattle traders who sought to make good money. Instead, they now have to spend money on basic facilities like water, which is unavailable at the market.

So far, over 1,000 livestock have been brought to the cattle market, largely from rural Sindh, and are being sold at a price range between Rs70,000 to Rs250,000. However, cattle owners complain that they are facing inconvenience and find it difficult to make the most of their sales, having to spend on other resources, due to the lack of facilities and increase in the prices of plots for cattle.

No water, no light

With no electricity, darkness shrouds the market after dusk and difficulties for cattle traders aggravate due to the unavailability of water. As a result, cattle traders are left with little choice but to spend up to Rs1,500 daily to purchase water and get used to working in darkness after sunset. It is estimated that a drum, containing 200 litres of water and costing around Rs2,500, fulfills the water needs of five animals. The price multiplies to an exorbitant amount in case the individual is required to buy water for a larger herd. Cattle traders have complained of the market administration’s lack of interest in providing water for them and their animals.

In addition to paying money for as basic a commodity as water, the cattle owners also have to pay an exorbitant amount on account of entry fee of animals. Each cow, buffalo and camel is allowed entry in the market for Rs1,600, while Rs1,000 are charged for each goat, sheep and lamb. Moreover, fee for the entry of vehicles carrying animals in the marshaling area is to be paid in accordance with the number of wheels of the vehicle. As much as Rs3,000 are being charged for the entry of a 22-wheeler and Rs1,300 for the entry of a vehicle having eight to 16 wheels. Entry fee for smaller vehicles, such as a four-to-six-wheeler mini-truck is fixed at Rs1,200 and for a pickup van at Rs800.

Even consumers are not spared from paying money on account of entry fee. The contractor of the market’s parking area has been issuing special passes, at varying rates, to let the customers take their vehicles inside the market. A pass for a single car is priced at Rs5,000 and a pass for a motorcycle costs Rs3,000. Those who don’t pay for the passes are required to park their cars in a parking lot located at some distance from the market and then walk all the way to the market.
Additionally, Rs6,000 have also been fixed as the entry fee for a pushcart.

Cattle traders have also complained about a substantial rise in the prices of plots allotted for the cattle. As per the new rates, the price of an 80-feet x40-feet plot in the VIP block has increased to an astounding Rs200,000 and a 30×120 plot, adjacent to the road, in the same block, is available for Rs175,000. Similarly, the price of a 30×120 plot located further inside the market, in the VIP block, comes at a price of Rs150,000. Furthermore, price of a plot at a prime location has increased to Rs50,000 and price of a plot located on the inner street has risen to Rs40,000.

Speaking with reference to the rise in the prices of plots, Najeebullah said that the rate list has been issued by relevant authorities and all payments are being made through pay orders made under the name of Malir Cantonment Board.