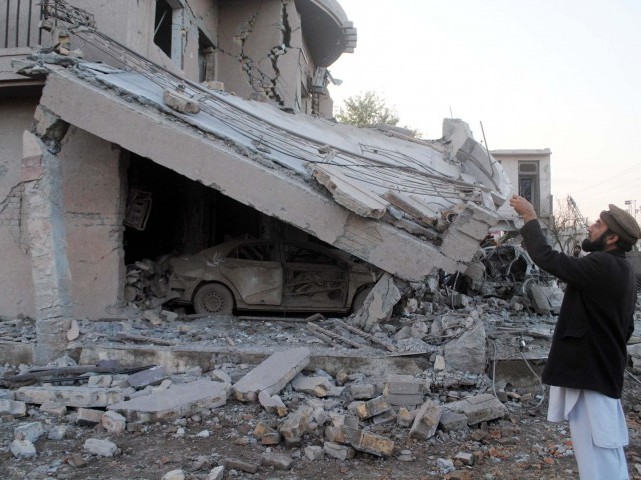 A person takes a photograph of one of the houses destroyed in the aftermath of terrorist attack on the Bacha Khan International Airport in Peshawar. PHOTO: MOHAMMAD IQBAL/EXPRESS/FILE

ISLAMABAD: The Pakistan Tehreek-e-Insaf (PTI) government has omitted the cost of war against terrorism in its flagship official publication and also shied away from disclosing the current situation of poverty during its first year of rule.

The Economic Survey of Pakistan 2018-19 that Adviser to the Prime Minister on Finance Dr Abdul Hafeez Shaikh unveiled during a press conference on Monday did not carry the chapter of cost of war against terrorism.

Dr Shaikh told The Express Tribune, “There are no more significant losses because of terrorism in Pakistan.”

However, the government has once again disclosed the terms of the Chinese loans in the survey that it had dropped from the official publication a few months ago.

China Development Bank has provided $2.23 billion worth of commercial loans on six-month floating Shanghai Interbank Bank Offered Rate plus 2.5 per cent, which at the current rate translated into over 5.5 per cent.

The Industrial and Commercial Bank of China gave $300 million on six-month London Interbank Offered Rate plus 2.75 per cent, according to the new survey report.

But the biggest surprise was the exclusion of the cost of war chapter. A similar attempt had also been made in the past due to the pressure from the United States, but subsequently the then government had decided to publish the chapter.

In the Economic Survey of Pakistan 2017-18, the PML-N government had reported that Pakistan’s cumulative losses from war on terrorism mounted up to $126.8 billion. There was a downward trajectory in the yearly additional losses because of marked improvement in the overall security situation.

Despite sustaining huge financial losses and rendering numerous sacrifices, the US has remained reluctant to acknowledge the country’s contributions and accused its non-NATO ally of deceit.

After 9/11, Pakistan had started including the cost of terrorism in its annual economic performance presentations as the country heavily suffered on account of loss of lives, economic opportunities and damages to infrastructure.

Compared with $126 billion previously published losses, an independent economist claimed that Pakistan’s economy sustained a colossal loss of $252 billion owing to the US-led war against terrorism, which was nearly eight times more than the financial assistance given by Washington to Islamabad.

The $252 billion price has been estimated by economist Dr Hafiz Pasha in his book titled ‘Growth and Inequality –Agenda for Reforms’.

The PTI government has also dropped a chapter on poverty, which is feared to have increased during the last almost one year due to official policies.

In the Economic Survey 2017-18, the PML-N government published the poverty statistics of fiscal year 2015-16.

In absolute terms, 50.4 million were recognised as poor against the earlier figure of 60.2 million in the last survey report.

The government also did not give fresh estimates of unemployment and reported 5.8 per cent unemployment rate for fiscal year 2017-18, which was the last year of the PML-N government.