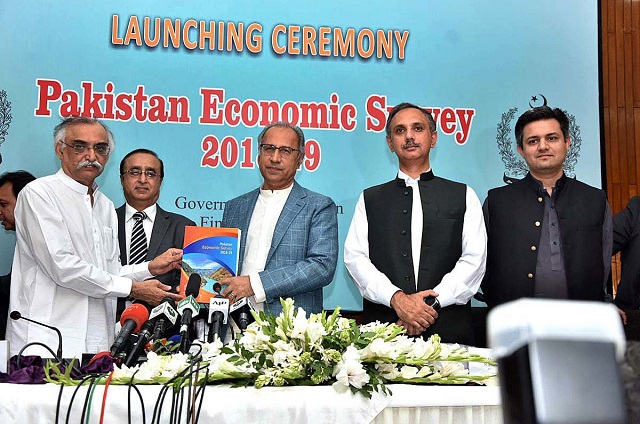 Finance Adviser presents the Economic Survey for this year in Islamabad. PHOTO: APP

A long wait for economists and people, who have been keenly watching economic developments since the Pakistan Tehreek-e-Insaf (PTI) came to power in August 2018, is over.

The government unveiled the Economic Survey 2018-19 – a report card displaying all economic indicators and how the PTI performed in its first year in power amid difficult conditions domestically as well as globally.

These put a lot of pressure on the country’s meager foreign currency reserves, which got some cushion from around $9.2 billion in deposits placed with the State Bank of Pakistan by Saudi Arabia, the United Arab Emirates and China.

Late in May this year, the government had reached a staff-level agreement with the International Monetary Fund for a loan of $6 billion over a period of 39 months.

This, along with the deposits placed with the central bank by friendly countries, is expected to help Pakistan meet its payment obligations – import payments and debt servicing – over the next many months.

In the meantime, Pakistan’s rupee has depreciated around 44% since December 2017, resulting in an increase in the debt servicing cost as well as inflationary pressure.

Also a massive challenge for the government was the widening fiscal deficit, fuelled by heavy domestic and foreign borrowing to meet growing expenditures. Revenue collection also remained unsatisfactory with the shortfall widening to Rs440 billion in first 11 months (July-May) in the current fiscal year.

As predicted by many economists, the central bank and multilateral lenders, Pakistan’s economy slowed down sharply in the current fiscal year, hitting a nine-year low at 3.3% and missing the 6.2% target by a wide margin.

Addressing the press conference, at the unveiling of the economic survey, Adviser to PM on Finance Hafeez Shaikh said, “We are ready for fiscal discipline and we are ready to take big decisions.”

‘We need to mobilise revenues and a new set of ideas will be presented for that we need to initiate a very aggressive campaign on austerity.’

IMF is a set of efforts over a course of three years, which will continue and we need to stay on the course.

‘Our biggest priority is protection of the vulnerable sector. We want to build institutions based on merit. Corruption will not be tolerated.’

Power theft to end in next few years: Omar Ayub

‘There is potential worth $80 billion in the power distribution sector, this includes high transmission lines.’

At the current point of time, there is a massive burden of circular debt on the power sector.

‘Circular debt of over Rs800 billion will be taken to zero by December 2020.’

‘We achieved our load management target of 99.4% in Ramazan.’

Country is in the stabilisation phase, whenever it comes out of this phase, it will be able to achieve higher economic growth: Hafeez Shaikh

‘We are collecting data of industrial connections from power distribution companies in order to catch those who are not filing tax returns.’

‘We also have information regarding non-filers.’

All banks have cooperated with us and have assured us that they will share CNICs of those paying withholding taxes, said  Shabbar Zaidi.

The purpose of the amnesty scheme is to widen taxpayers net, not revenue collection: Hammad Azhar

PTI government has stopped de-industrialisation in the country
as three to four years ago, it became known that industries were gradually vanishing.

Efforts will be made to roll over debt on long-term basis and to minimise the interest rate with the number of overall borrowings having swelled to Rs2.82 trillion; of which Rs1.22 trillion was due to devaluation, while Rs1.6 trillion was the net increase.

Unorganised sectors needs to be documented, policies should be such that it is represented in the economic survey: Hafeez Shaikh

Pakistan is facing a situation where it has to borrow to repay old debt and make interest payments.

As far as the zero-rated sector is concerned, the decision will be unveiled in the budget.

There will be strong and sincere steps in the budget tomorrow and you will see our actions, which will slowly build confidence.

The purpose is not to scare anyone, but pure facts have been shared to show you how tough the challenges are.

We want to help the private sector to give impetus to economic activity.

He said the government will not let the electricity tariffs rise for people whose consumption of units is below 300 units, adding that there was a subsidy of Rs216 billion in the budget to protect the vulnerable segment of the society despite budget constraints.

He said that we have to pay Rs3 trillion interest on Rs31 trillion worth borrowings of the country.

The country cannot flourish solely on the back of boosting dollar reserves. We need to strengthen our institutions.

The reserves of the central bank fell from $18 billion to $9 billion in two years. Currently, the reserves stand at $8 billion, said Hafeez Shaikh.

The current account deficit reached to a record high of $20 billion and the trade deficit rose to Rs32 billion.