All people inside the buildi­ng evacua­ted to safety, says ISPR
By Mohammad Zafar
Published: May 11, 2019
Tweet Email 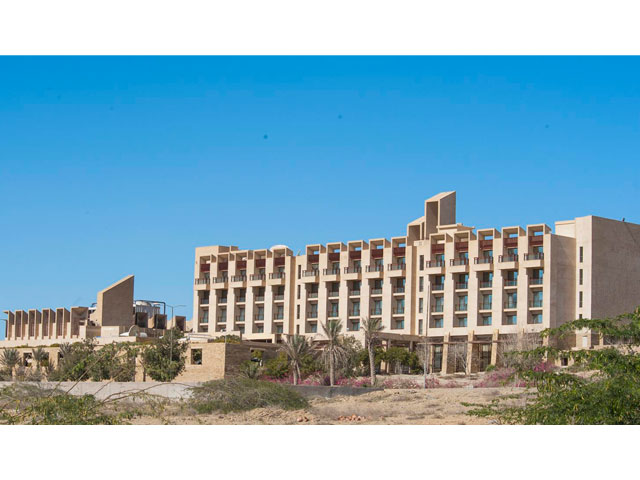 QUETTA: Security forces on Saturday thwarted a terrorist attack on a five-star hotel in the port city of Gwadar, Balochistan. They evacuated all the guests from the hotel, while the operation is still going on to either capture the militants or neutralise them, official sources said.

According to the Inter-Services Public Relations (ISPR), the terrorists attempted to force their way into the plush Pearl Continental Hotel and were challenged by a security guard. The terrorists opened fire at the guard, who embraced martyrdom, the military’s media wing added.

The other guard injured in the attack succumbed to his injuries during treatment at a nearby hospital.

“Two security guards have been killed in the terrorist attack and two others injured,” said Gwadar DIG Munir Ahmed Zia Rao, adding that clearance operation was going on.

Balochistan Home Minister Mir Ziaullah Langove said, “Some people have also been injured in the attack, which was later claimed by the banned Baloch Libration Army’s Majeed Brigade.”

Security forces immediately rushed to the building and cordoned off the entire area. They safely evacuated the people present inside the hotel. “Terrorist[s] encircled by security forces in staircase leading to [the] top floor,” the ISPR statement said. “The clearance operation [is] in progress.”

Sources said the attack unfolded at around 5pm, as the attackers started firing. The Navy commandos, army and the paramilitary Frontier Corps (FC) troops rushed to the site and launched an operation. Navy helicopters also provided aerial cover.

According to the sources, security forces first evacuated the people from inside the hotel to safety. They denied rumours of the presence of any foreigners residing in the hotel. “There was no foreigner staying in the hotel when armed men launched attack,” Langove said.

A senior police officer also confirmed that there was no guest in the hotel.

“Only local staff of the hotel was present at the time of the attack,” police officer Aslam Bangulzai said, adding that the staff were evacuated safely by the security forces.

After taking control of the building, security officials said, the forces cleared the first floor of the hotel where the armed men were holed up. “The terrorists are confined to a portion of the hotel, where exchange of fire continuing with intervals,” a source said.

Meanwhile, reports reaching here suggested that the security forces were still busy in clearance of the hotel after the attackers were killed. “A clearance operation is continuing,” an official source said.

Mohammad Aslam, the officer on-duty in Gwadar, said ambulances and rescuers were waiting at a road leading to the hotel. He added that he could hear gunfire but that the operation was coming to an end.

The hotel sits isolated on a ridge overlooking the Arabian Sea port city. According to the Chinese media, there was no news of Chinese people living in the hotel. “The Chinese personnel in the Gwadar Port Area and the Free Zone, which are several hundred metres away from the hotel, are safe and protected by the Pakistani military,” China Economic Net reported.

Meanwhile, Balochistan Chief Minister Jam Kamal Khan strongly condemned the terrorist attack on the five-star hotel in Gwadar. “Such attacks cannot force the government and the people to bow down before the terrorists,” he said in a statement.

The chief minister said timely action by security forces foiled the designs of the elements involved in the attack. “The security forces through their effective strategy safely evacuated the people present in the hotel when the attack was launched.”

Kamal said the government and security forces would ensure safety of the people of the province and would not leave them at the mercy of such elements. He directed the authorities concerned to take strict action against such elements.

Though ISPR is claiming that the operation is going on, the China Economic Daily states that the terrorists have been neutralised.