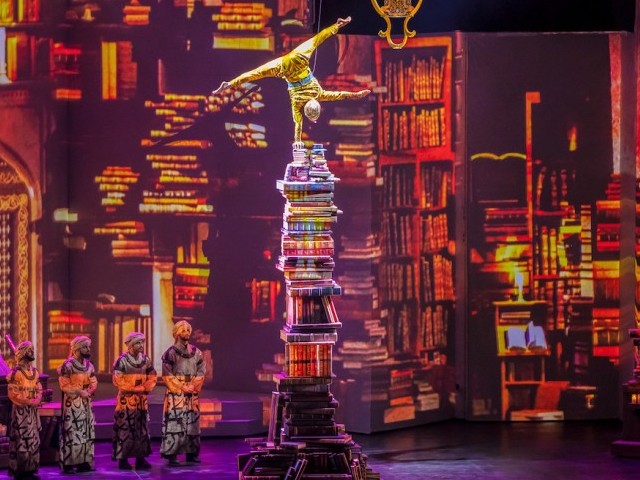 A performer atop a pile of books during the premiere of 1001 nights: The Last Chapter at World Book Capital opening ceremony in Sharjah, United Arab Emirates. PHOTO: EXPRESS

SHARJAH, UNITED ARAB EMIRATES: Once upon a time, a king of kings ruled over the Arab lands. His domain stretched far and wide, reaching parts of India and China. The monarch was content and happy with his empire, until a terrible betrayal shattered his very soul, and forced him on a path of murder and violence unlike anything the world had ever seen.

The legend goes that one day, the unsuspecting Shaheryar was shocked and dismayed when he learned about the blatant infidelity of his first wife, throwing a fit of frenzy in which he had the queen killed. As the bitterness and grief of the whole episode engulfed him, the king decided to blame the gentler sex for his compounding misery.

Each day, Shaheryar proceeded to marry a virgin. He would spend the night with the girl before having her killed as the next day dawned, presumably satisfying his lust for honour. According to the narrator of the tale, the man tasked with providing the king these women eventually realised there were no more virgins left in the land, except his own daughter.

The business partnership between space studies and war planning

The girl, Scheherazade, came up with an ingenious plan to tame the king. Each night, she would tell the king a story but would not end it. Shaheryar, enticed and curious, was thereby forced to let the girl live, just so he could hear how the story concluded. The next night, the queen would begin another tale, leaving it incomplete, and lived for another day. Thus passed a one thousand and one nights, the title of the famous Arabian folktale revered as a literary masterpiece all over the globe.

Thought to have been composed during the golden age of Islam, 1001 nights in Arabia is rich in language and mythical flair, as well as a testament to the unbridled success of Muslim intellectuals, both scientific and artistic, during the middle ages and early renaissance period of human history in western textbooks. In those days, the literary and scientific centers of the world were located in the Middle East, attracting talent and fame from all corners of the earth.

Those days are long gone, but 1001 nights in Arabia serves as a powerful reminder of the time, inspiring and fueling the nostalgia for greatness in Muslim authors of the present day. Honouring and building onto that tradition of the pursuit of knowledge, the emirate of Sharjah in United Arab Emirates is emerging as the literary capital of the modern Muslim civilization, sponsoring and promoting bookshops, libraries, theaters, museums and artists.

Rekindling the light snuffed out by patriarchal honour

In line with the decade-long efforts of the emirati government, the city was recently anointed World Book Capital by United Nations Education, Scientific and Cultural Organisation. A ceremony to mark the occasion was held at al Majaz Amphitheater in Sharjah on April 23, where a team of more than a thousand individuals put up a spectacular show, recreating the legend of 1001 nights on stage for a packed audience.

Titled 1001 Nights: The Last Chapter, the performance was the brain-child of creative giants Multiple International, 7Fingers and Artists In Motion. The audio-visual spectacle was speckled with daredevil acrobatics and aerial stunts as part of 13 varieties of performance arts, which came together to narrate a story Scheherazade never told before.

The 90-minute show unfolded in three main acts, each led by one of Scheherazade’s children, Fayrouz, Kader and Amin. Instructed by their mother to reach out to three most treasured items in the world – a bottle of ink, a feather and a book – the three undertook exciting journeys to far-away lands full of danger, mystery and intrigue created by an awe-inspiring stage setup and design, and special effects. 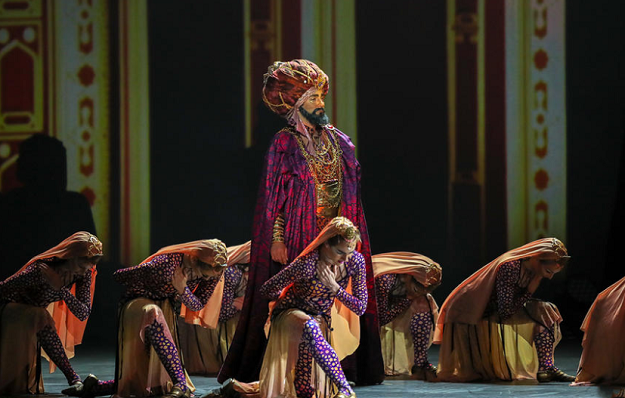 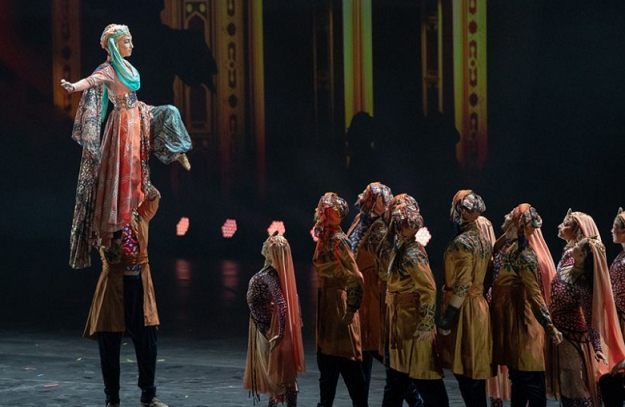 In the first act, Princess Fayrouz was tasked with visiting a prince who lived a cursed life surrounded by darkness. His lover had been turned to a tree from a curse that could not be broken. A grand tree appeared on stage, split in half – each containing a portion of her body and soul.

“This curse will persist for as long as you cry for yourself. Only the greatness of your love for your people and for her will unite the trees and bring your lover back,” Fayrouz told the prince, leading to this awakening that changed his life forever. His new-found happiness was also the curse’s antidote.

The curse was lifted and the tree became one, releasing the prince’s lover. A spectacular acrobatics show and choreography perfected by the artists on stage rung in a beautiful celebration of selfless love, and a strong beam of light emerged from the base of the unified tree, producing a bottle of ink – the piece of treasure Fayrouz travelled countless miles looking for.

In the second act, upon arrival into the valley of darkness, which holds in its depths a precious tool that has the ability to produce the kind of knowledge not yet known to humankind, Kader was faced with an army of dark forces – some external, some created by the shackles of his own mind.

Triumphant, after a battle with the forces of evil, portrayed by an impeccably performed break dance routine to an Arabian symphony created by the show’s 51-piece orchestra, he put his last opponent to ground.

A dance of triumph followed, where four acrobats tied to arabesque chains suspended in mid-air performed jaw-dropping stunts against a fiery stage backdrop. Finally, Scheherazade’s voice told Kader: “You will know you are worthy if a Phoenix rises before you.” The bird rose from the ashes and presented him the treasure he had travelled countless miles searching for – a glorious long feather from her body.

Moving onto the third act, Amin’s emotional upheaval, his quandary in facing the toughest questions about knowledge and life were projected by a wall trampoline act to an upbeat orchestra piece. To the audience, it appeared as if these humans were emerging from the depths of the earth, reaching the top of an enormous wall within fractions of a second.

Artists presented a celebratory dance to mark Amin’s arrival into this ancient treasure house that had been kept a secret for several eons. Next, a soaring structure resembling a pile of single books appeared on stage, and on top climbed a performer to present hand stands, finally reaching out to the long-guarded treasure – a book– Amin had been tasked by Scheherazade to search for. 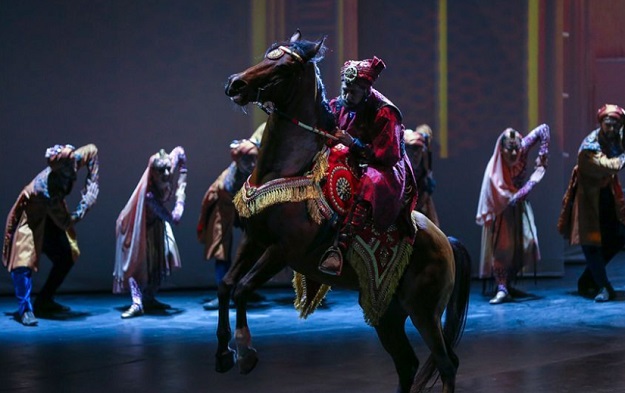 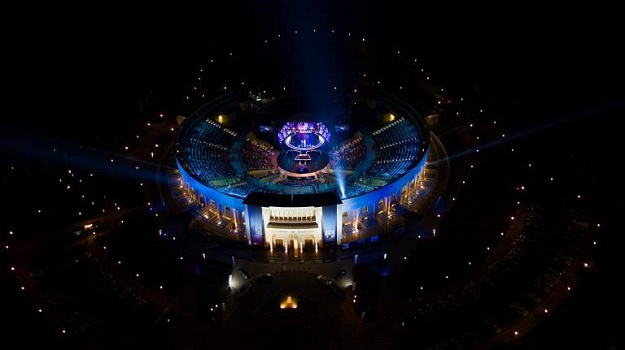 The final touches to this sweeping and never-seen-before interpretation of a literary treasure were offered when the three children came home to Scheherazade and King Shaheryar, and presented the three treasures they had found on their respective quests.

With the ink, feather and book, master storyteller Scheherazade was trying to tell her children that knowledge is the best of all treasures and the quest for it is as exciting a journey as can ever be.

The audience at the amphitheater gave a standing ovation to the crew after the show, and indeed many people outside the venue were full of praise for the people who brought this story to the stage.

“A spectacular performance. I have seen some shows during my life, and this was one of the freshest and most spell-bounding ones I have ever witnessed,” an excited audience member told The Express Tribune.

Perhaps the freshness of the experience was down to the fact that new audio and visual story-telling techniques were used to present a show which wasn’t a classic drama, musical or opera, but a blend of all, including acrobats and dancers.

The message of the show aimed to set the tone for the remainder of the year, as Sharjah celebrates culture, arts and entertainment through the medium of the written word through till April 2020. 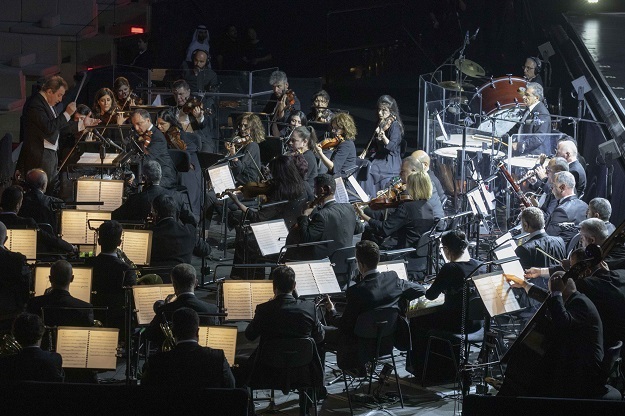 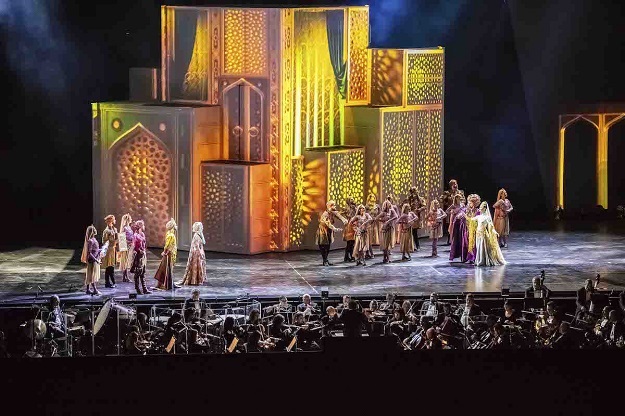 According to reports, the al Majaz Amphitheatre had commissioned a team of 537 members to form a blend of strategists, creatives, designers, post-production artists and technicians, who brought this production to stage.

The show was enjoyed by the crowd simultaneously in three languages – Arabic, English and French. The cast and live entertainment specialists brought the performance to a 43-metre wide stage.

The Express Tribune sat down with the creative director and producer of the show to have a conversation about the message behind the hybrid performance, and to discuss the unique placement of this show in the larger cultural renaissance of the Arab world.

“We needed to bring something new to this old story. Everyone is familiar with 1001 nights, and our challenge was to start from a blank canvas, and put up a story that had never been told before and put it on stage,” outlined Chief Producer Waseem.

“We studied the life of the characters in the stories. And we came up with a new story. So in a sense, people who see the show will be able to witness a thousand and two nights,” he added.

“We also needed to bring something to Sharjah, a city which has amazing commitment to books, and hosts one of the largest books fairs in the world every year. The easy way out would have been to take one story from the folktale and stage it, but we wanted to go beyond that.”

According to Phillip Skaff, handling a crew from so many different countries to stage a performance for a crowd in a big, open-air theater was a fantastic achievement.

“From the beginning, it took us around two months to come up with the creative premise of the show. It took us more than forty versions to choose the right version. A lot of hard-work went into this show,” he said. 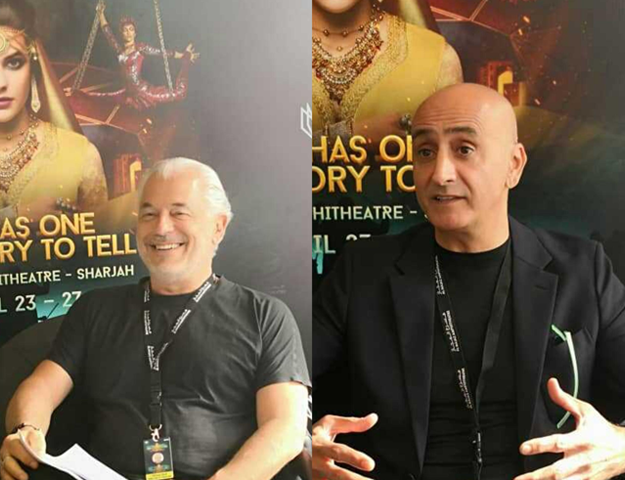 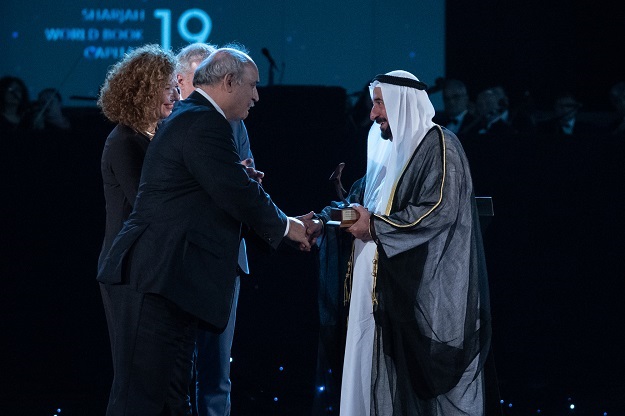 The celebrations coincided with World Book Day and Copyright Day marked globally on April 23, and was a recognition of the emirate’s cultural accomplishments, particularly in promoting books and reading, at both regional and international levels.

The ruler of Sharjah highlighted how the emirate’s relationship with the book attained a new meaning as it became the bearer of this new title.

“I stand before you and I am almost certain that I am visualising our great forefathers – scientists and thinkers, filling libraries of the world with knowledge,” he said on the occasion.

“It shines a light on the path of humanity, and leaves us a human legacy that we are proud of, and hold dearly,” he added.

“It is a great honour to follow in the footsteps [of our great forefathers]. To embrace books and knowledge as a tool to build, not destroy. A tool to nurture love, brotherhood and tolerance.”

Head of the Inauguration Ceremony Committee of the Sharjah World Book Capital Sheikh Sultan bin Ahmed al Qasimi also spoke to the media before the premier of the show. “1001 Nights: The Last Chapter’ is set to change the face of live entertainment in the UAE, and will reinvent the genre of performing arts,” he said.

“What we call memory cannot be just a fleeting moment in a person’s life. A memory holds the power to influence our lives and shape our personalities. This means our histories and cultures are a product of these memories and will continue to form and catalyse human heritage in the future.”

According to Qasimi, there is no doubt that 1001 Nights: The Last Chapter will be an artistic landmark, not just in the UAE but around the world, and add valuable currency to Sharjah’s rich cultural bank.