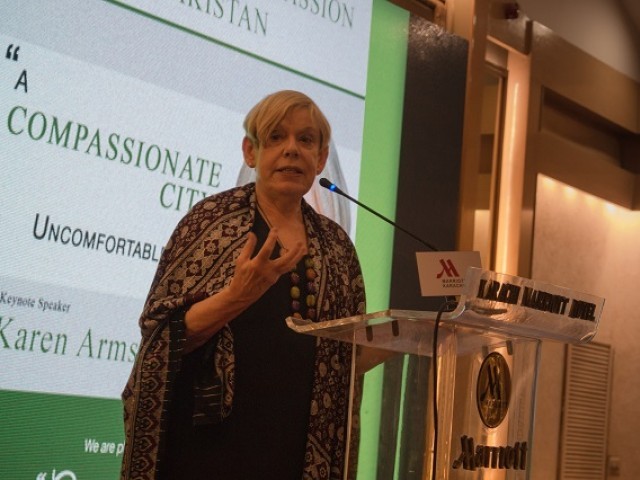 KARACHI: Nearly every single fundamentalist movement in Islam, Christianity and Judaism began with what was perceived as an assault by an aggressive secular government, according to acclaimed author and scholar of comparative religion Karen Armstrong.

The award-winning writer made the remarks while talking to The Express Tribune in an exclusive interview at Marriott Hotel in Karachi on Wednesday.

Armstrong was in the port city for the inauguration of a street-school for underprivileged children, as well as other events related to her non-profit organisation, the Charter for Compassion.

The author also delivered a lecture on the need for compassion in an increasingly unkind world to prominent members of the political and academic community gathered at the venue. 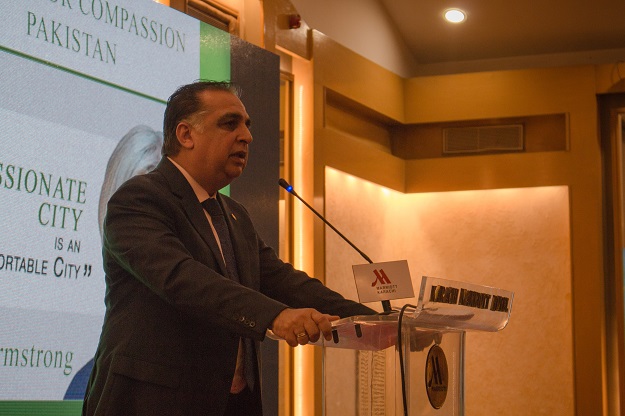 Charter for Compassion is working on multiple projects in Karachi to transform the city according to Armstrong’s vision. The projects include the Compassionate School Network which works with educators to bring empathy into the classroom; Mumkin, a women’s empowerment initiative; the Collaborative Libraries Project and Compassionate Sports.

The lecture by the religious scholar touched on topics such as human suffering, the quest for religion and meaning, and the universal virtue of compassion preached by all major faiths. Armstrong quoted examples from ancient Greece, Persia, China, India and Arabia to get her message across to the audience.

“A compassionate city, I was once asked, what should it be like? And I caused a certain amount of consternation to people who thought it would be full of peace, love and joy when I said that a compassionate city should be an uncomfortable city,” Armstrong told the audience during her talk.

The eminent historian underlined that if anyone in the world is suffering, it should make a compassionate city uncomfortable. Suffering, in her opinion, lay at the heart of the religious quest, and all the great philosophers and founders of religion had preached compassion.

In conversation with Karen Armstrong

The Express Tribune sat down with Armstrong after her lecture and asked her about the future of Charter for Compassion in the country.

“I have been enthralled by what has been happening in Pakistan. It is way above everyone else who is working on it across the world. So my plan is to take this to other countries and show them that this is the way forward,” the author said.

Responding to another question about the rise of populist and unkind leaders all over the globe, Armstrong maintained that teaching compassion to the world of nation-states was a challenge.

“But we do live in democracies. So the idea is to spread the word of compassion. People know about compassion, they feel it. What we need is to get this to be an active force, so people demand it of their leaders. As long as we go on putting up with this kind of leadership, they would go on being this way [unkind].”

Asked about the unprecedented rise of violence around the world, the historian underlined that suffering lay at the core of the increase in violence.

“In many cases, there has been a rise in violence because there has been suffering, of some form or another. In Paris, Muslims who committed appalling acts [crimes] have been treated abominably by the French government.  They [Muslims] are put in slums. There is a curfew for Muslim communities there, just a few yards from metro stops in center of the town.”

The author further said that some young people were angry and hurt because of injustice. “Nearly every single fundamentalist movement I have studied, in Islam, Judaism and Christianity, has always begun by what is perceived as an assault by an aggressive secular government,” Armstrong observed.

Armstrong recounted tales from classical history to make listeners understand the true meaning of her mission. One of those stories was from the ancient cities in Greece, which were among the first city-states in the world, called a polis in the local language.

“In the 5th century before the common era, when the Greeks established the genre of tragedy, every year, on the festival of Dionysus, a whole city would gather to attend the theatrical presentation as a civic duty,” she explained.

She further noted that the Greeks believed that sharing pain together created a bond between people, and would bring the city together. According to the author, during these performances, the people gathered would be told to weep for the characters in the tale.

Another inspiring story meant to teach Greeks compassion, and conveyed to the audience, dated back to year 472 before the common era, when one of the most celebrated Greek writers, Aeschylus, wrote a play about the Persians, who were a sworn enemy of Greeks, in order to instil compassion in the hearts of people.

“Just eight years earlier, Athens and Persia had been engaged in a catastrophic war, and during the course of the hostilities, the Persian army had rampaged through Athens, trashing all the buildings and desecrating all the new holy temples that had been built on the Acropolis,” Armstrong said.

“Aeschylus asked the Greeks, just eight years later, to weep for the Persians. In the play, there is no gloating, no nationalistic chauvinism. Instead, the Persians are presented a noble people, the sister city of the Greeks. And there are people in mourning.”

“This is a remarkable feat, But it is something we are not achieving very well in the modern world after war and hostilities, to weep, also, not for ourselves, but also for the so-called enemy,” the author reminded those gathered at Marriott.

A third story, relating to the life of ancient Chinese sage Confucius, conveyed how compassion was the core of the religious quest in China, as well as the rest of the world. 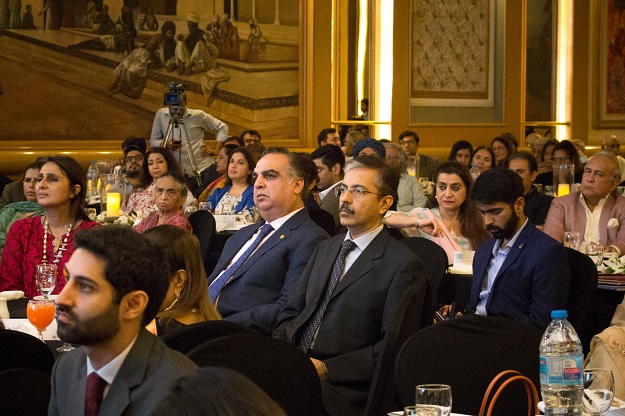 “The first person to enunciate compassion in a written form was Confucius, five centuries before the common era. His disciple said, Master, which of your teachings sums up everything that you have to say, which can we put into practice, all day and every day?” she recounted.

“And Confucius said, likening to the self, look into your own heart, discover what gives you pain, and then refuse, under any circumstance whatsoever, to inflict that pain on anybody else. Never treat others as you would not like to be treated yourself.”

Armstrong reiterated that compassion is required of the people to dethrone themselves from the centre of their world and put another there, instinctively.

“If we did it all day, and every day, as Confucius said, we would transcend the ego, which is the cause of so much of our misery and suffering and which holds us back from enlightenment,” she said.

The religious historian also talked about Buddha, and how there was a story told about the enlightened man which had captivated the imagination of people across millennia.

“After Buddha had achieved enlightenment, an inconvenient thought occurred to him that perhaps he should teach others how to do this, that he should spread the word. And he thought, no I do not want to do that. This is going to be too depressing because people do not want to give up their egos.”

However, according to Armstrong, Buddha saw the world around him and the suffering he saw filled him with such compassion that he preached his teachings for the next forty years in Indian towns and cities.

“Even Prophet Muhammad (PBUH), after he had received his revelation on Mount Hira, did not spend his time locked in prayer in that mountain cave. He went down to Mecca and began a long, hard journey to establish a just and equal society.”

Religion gives us the mandate to heal the pain of others, not just to simply say our own prayers, she added.