Locals say there is no price contro­l mechan­ism ahead of Ramaza­n
By Imran Adnan
Published: April 22, 2019
Tweet Email 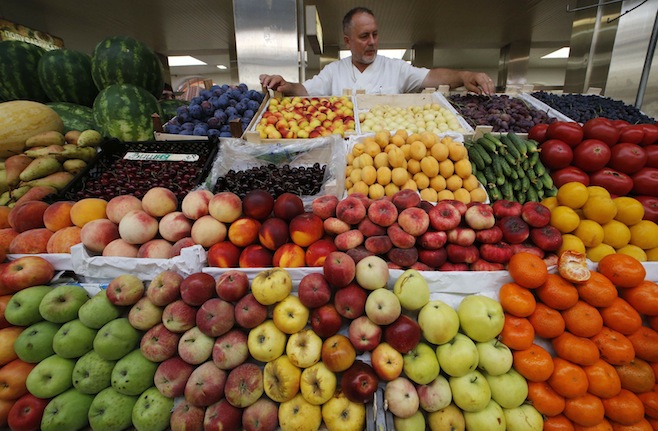 The prices of common use vegetables such as potatoes, onions and tomatoes have all increased. PHOTO: REUTERS

LAHORE: In the absence of an effective price control mechanism, the rates of all essential commodities, including fruit and vegetables, have been jacked up ahead of Ramazan.

The Punjab government has called a meeting to finalise the Ramazan Package 2019 on Monday (today), but prices of all essential commodities have already gone through the roof. Market players are hinting at further increases in the coming weeks.

A market survey of different city areas, including Sunday bazaars, indicates traders and greengrocers have increased prices of all seasonal fruit and vegetables by 50% to 100%. Profiteering and overcharging is rampant in the Lahore, but neither the provincial nor district administration seems able to rein in these menaces.

Speaking to The Express Tribune, various citizens have complained that the sheer negligence of the Pakistan Tahreek-e-Insaf (PTI) government and state machinery have enabled greengrocers and vendors to fleece locals in broad daylight. They pointed out that not a single government official or political leader was available to check commodity prices.

K-P CM orders checking of prices ahead of Ramazan

Muhammad Salman underlined that the entire population was already bearing the brunt of inflation as a result of the poor economic policies and immature decisions of the PTI government. “Now, this artificial price hike, ahead of the holy month, is the worst example of bad governance,” he said.

“What is the use of these so-called public representatives if they cannot not develop an efficient price control system? They know how to raise their salaries in the worst economic situation, but they are unaware of common citizens’ problems,” he lamented.

Nasir Hussain, a shopper, pointed out that the deputy commissioner, Punjab chief minister’s advisers and other senior officials responsible for controlling and monitoring essential commodities prices always visit markets and bazaars with their official photographers for photo opportunities.

“These fame-hungry officials keep themselves busy with photo sessions while vendors fleece the public right under their nose,” he remarked. “I believe that if government officials and politicians have even a little will to address this issue, the country would have solved this problem years ago.”

Recently, the provincial information minister claimed that the PTI government was going to announce the biggest ever Ramazan package to provide relief to common citizens.

“A major chunk of this Ramazan package subsidy – financed through taxpayers’ money – will be used to neutralise the impact of the current artificial price hike. Common citizens would be humiliated in long queues to get subsidised products in Ramazan bazaars,” Hussain said.

Prices to be controlled during Ramazan

Survey of different Ramazan bazaars showed a very bleak situation as vendors were selling second or third-grade fruit and vegetables at a premium price. In most makeshift markets, the majority of seasonal fruit and vegetables were missing, but no government official was available to listen to public complaints.

Artificial skin — a ray of hope for burn patients