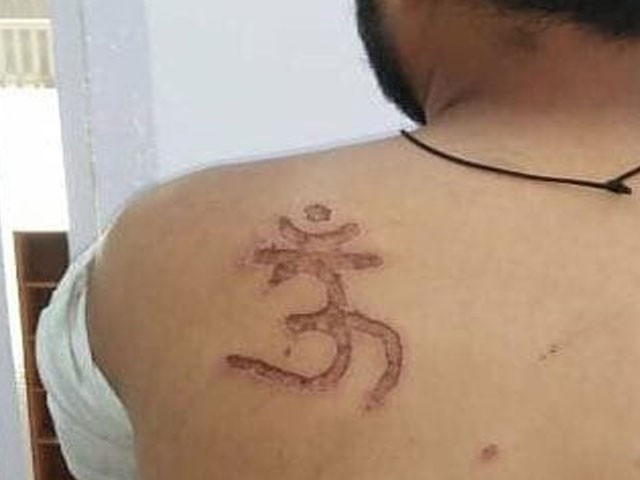 An Indian court orders Shabbir to be removed from the direct or indirect supervision of jail superintendent. PHOTO COURTESY: INDIA TODAY

Shabbir, a Muslim man who has been behind bars in an Indian prison, claimed he was beaten and branded with an ‘Om’ symbol by the officials inside the prison premises.

According to an Indian media report, the case surfaced after the man’s family approached a local court with their complaint that their son’s life was in danger in Tihar prison.

When Shabbir was brought before the magistrate, they found the Om symbol had been engraved on his back.

On April 12, Shabbir raised a complaint with prison superintendent Rajesh Chauhan and told him that the induction stove in their barracks was not working properly.

Incensed by the complaint, the prison official started beating Shabbir.

Chauhan later summoned Shabbir into his office, berating him for “trying to be a leader” and beat him with other prison officials.

The Tihar prison superintendent then took a metal Om symbol, heated it, and branded the Om on Shabbir’s back.

Shabbir was then denied food for two days. On April 14, Chauhan told him that he was “converted to Hinduism as he had ‘fasted’ during the Hindu festival of Navratri”.

The prison officials also berated him for his religion saying “you Muslims have destroyed our country”.

Shabbir narrated his ordeal to his family, who contacted their advocate.

The case was heard by an Indian court on April 17. In the courtroom, the judge asked him to narrate his story, and then she saw the branded symbol herself.

The judge ordered that Shabbir was to be medically examined, and immediately removed from “the direct or indirect supervision of jail superintendent Rajesh Chauhan”.

The court also ordered an enquiry within 24 hours. No official from the Tihar authority appeared before the court.

The court would hear the matter on April 22.