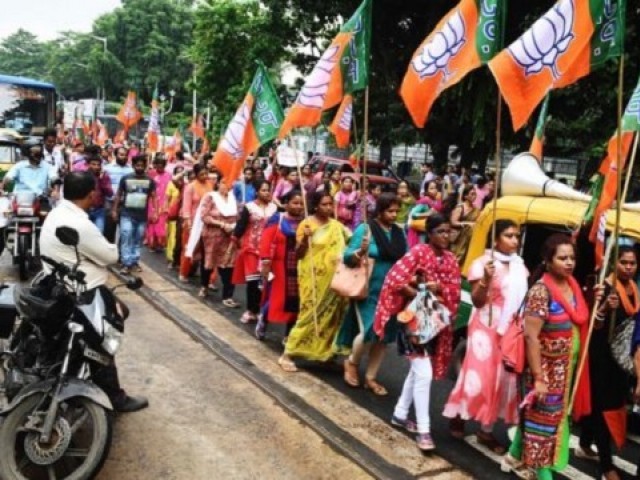 BJP activists have been out in support of the NCR. PHOTO: AFP

An exercise to identify illegal migrants in the north-eastern state of Assam is “not targeting Muslims”, said Indian officials.

The Hindu nationalist Bharativa Janata Party (BJP) has been accused of destroying lives by the opposition parties, BBC reported.

Prateek Hajela, who is the head of NCR, told the BBC that the people excluded “are from different religions and groups”.

The exercise, in a state with a history of communal violence, has stirred controversy. The list published is of people who can prove that they arrived in Assam before neighbouring Bangladesh declared independence, prior to March, 24, 1971.

Hajela told BBC Urdu’s Shakeel Akhtar that the process “is about a specific date and has got nothing to do with religion, caste or race”. The NCR head was appointed by the Indian Supreme Court.

However, the opposition parties – especially Congress party – and a few human rights groups called it an attempt to strip four million people, with many being Muslims, of their citizenship.

Critics have also accused the Indian Prime Minister Narendra Modi of BJP of pushing for the list for political purposes ahead of the Indian general election next year.

But the Indian government has maintained the process is needed to root out illegal Bangladeshi migrants.

Home Minister Rajnath Singh called the process “fair and transparent” and told the upper house of parliament that “no Indian citizen would be left out”.

Many Bengalis – a linguistic minority in Assam – are also worried they will be deported en masse.

Although Hajela said the list was not ‘final’ and the people not included in it can appeal and submit “fresh documents” to claim citizenship in the coming months.

One dead after tanker truck explodes near Bologna