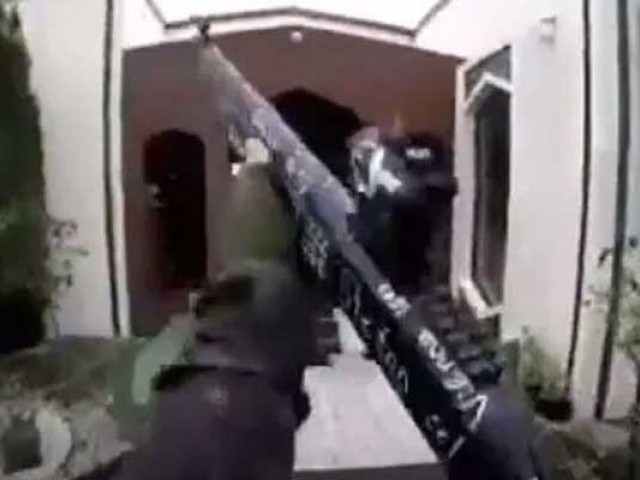 A gunman broadcast live footage on Facebook of the attack on one of the mosques. PHOTO: FACEBOOK LIVE

QUETTA: A mourning day was observed across Balochistan on Monday, including its capital Quetta, against the killing of 50 Muslims, including nine Pakistanis, in a terrorist attack at two mosques in New Zealand on Friday.

The national flag flew at half-mast at all government buildings in honour of the martyred and the injured in New Zealand.

The notification was issued by the Interior Ministry the other day to express solidarity with the bereaved families in the gruesome terror incident that took place at the two mosques in Christchurch.

Talking to APP, Balochistan Chief Minister’s Media Coordinator Bilal Khan Kakar strongly condemned the attack on Muslims in New Zealand, expressed deep sorrow with the bereaved families and prayed for the early recovery of the injured.

Kakar said Muslims were present in the two mosques in the city of Christchurch offering Friday prayer when an armed man opened fire at them.

He said, “The whole nation is mourning over the New Zealand tragedy. People of Balochistan are observing a day of mourning to express solidarity with the grieving families.”

He said the national flag was flown at half-mast at the Governor House, Chief Minister House, Balochistan Assembly, civil secretariat and other main government buildings, according to notification of the Interior Ministry.