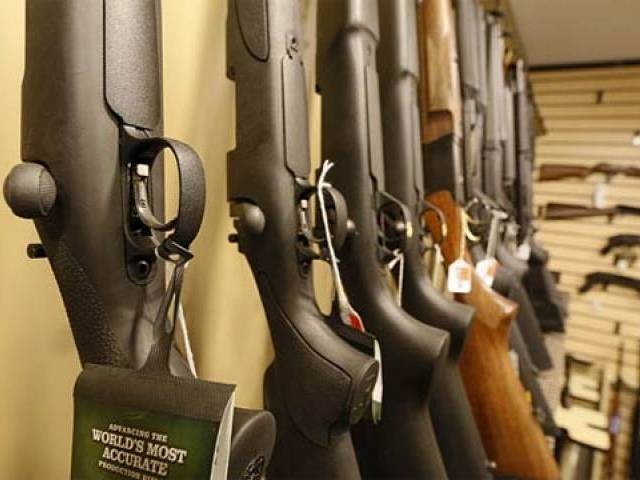 KARACHI: An anti-terrorism court (ATC) once again issued notices to the Home secretary on Saturday regarding the provision of weapons, bullets and licences to terrorists. The court also directed the Anti-Violent Crime Cell (AVCC) SSP to appear before the court with a report.

The FSL DSP presented a report which maintained that neither had the dealer ever sent them empty bullet shells for record nor had they received any orders in this regard from the higher authorities.

The court expressing discontentment issued a notice to Home secretary once again and directed him to present a report on action taken against those violating Section 4-A of the Sindh Arms Act.

In the previous hearing, the court had also directed the home department to present a report. In its verdict, the court inquired about how many dealers were in violation of Section 4-A and the number of dealers the department had taken action against.

The court remarked that despite the court’s verdict, none of the departments, apart from FSL, had presented any report.

According to the police, two accused, Imran Niazi and Saeed Nawaz, were arrested from MA Jinnah Road on January 1. Weapons and licences were seized from their possession. During the investigation, the accused confessed that with the help of registered weapon dealers they provide weapons, bullets and licenses to terrorists.

The challan names staff of the South and East deputy commissioners’ offices as well as the arms branch for their involvement in the crime. Weapon dealers and nine others of the DC office staff have been arrested. All the accused are on bail now. More than seven accused are fugitives in the case.

An ATC issued a notice to the magistrate who recorded the confessional statement of Muttahida Qaumi Movement (MQM) worker Kazim Abbas Rizvi, accused in the Naimat Ali Randhawa murder case, under Section 164 of the Code of Criminal Procedure. Rizvi and another accused, Noman, who is also an MQM worker, were produced before the court.

At the last hearing, the magistrate had said that he recorded the accused’s statement five to six years ago, but he couldn’t recall whether the accused was the same man standing in the witness box.

The court issued a notice to a magistrate recording the statement and adjourned the hearing till March 20.

The court has declared three MQM men as absconders in this case. These include Azizullah, Abdullah alias Danish and Ghufran alias Sindhi. According to the police, the accused opened fire on Randhawa in September 2013 in North Nazimabad and killed him. The victim’s son, Tauqeer Randhawa, was also injured in the firing incident.