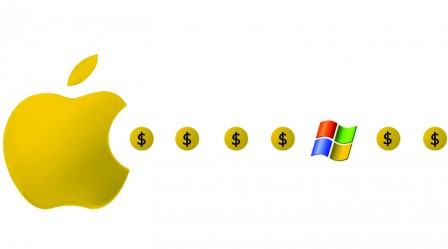 Most recently Apple’s market capitalization crossed $230b, surpassing Microsoft and achieving a historical milestone in the PC industry

KARACHI: Steve Jobs, returned to Apple in 1997 after being ousted by the board in 1985 in the midst of a power struggle. Upon his return he unleashed strategic forays that left the entire market baffled—from PC makers to mobile phone companies and operators.

When Microsoft was starting off, Bill Gates’ focus was primarily on growth and his philosophy was to let everyone do what they were best at. HP, Compaq, Dell and other PC makers focused on the hardware. Companies like NVidia and Logitech focused on the graphics card and peripheral devices. PC repair shops cropped up at every street corner. Everyone who had anything to do with the PC industry was a winner, except for Apple.

Apple was a lot more close-fisted. It wanted to apply the approach of car makers to computers and control the entire experience from the controversial one-button mouse to the monitors, cabling and even the retail stores. Consequently, the machines were a lot more costly to produce and had to be sent to Apple headquarters for repairs. Other than Apple, only those who made software running on Apple computers were able to profit. And these people were few and far in between because it was far more profitable to make software for Microsoft Windows.

Apple almost went bankrupt but in one of the most ironic turn of events, Microsoft invested $150 million in Apple in 1997 to give the company some breathing room.

In October 2001, just before Christmas season, Apple introduced the iPod which would be its saving grace. It embodied Apple’s central design philosophy of simplicity and provided enough cash for Steve Jobs to start expanding the company. Apple has nearly 300 self-owned retail stores around the globe with hundreds of other authorized resellers. The iTunes music store has become the largest music store in the world surpassing even Walmart. The iPhone is so easy to use that majority of the mobile traffic on the Internet comes from an iPhone.

The timing could not have been better for Apple. Microsoft slipped by 2 years in shipping Windows Vista, which was still too bleak. The Operating System itself is saturated to that point that people see no reason to upgrade from Windows XP which is “good enough”. The primary use of the PC has become Internet surfing and even there Microsoft has long neglected Internet Explorer while Apple has made big leaps in the browser market, providing some key components for even Google’s Chrome browser.

The iPod evolved into the iPhone and recently into the iPad. Small incremental updates and flawless product design allowed Apple to inch its way into new product lines threatening Blackberry, Nokia, Microsoft, Sony and many other established companies who are still quite puzzled as to how it all happened. Technology truly is disruptive.