Tells FBR chairm­an his organi­sation could not be reform­ed
By Shahbaz Rana
Published: March 13, 2019
Tweet Email 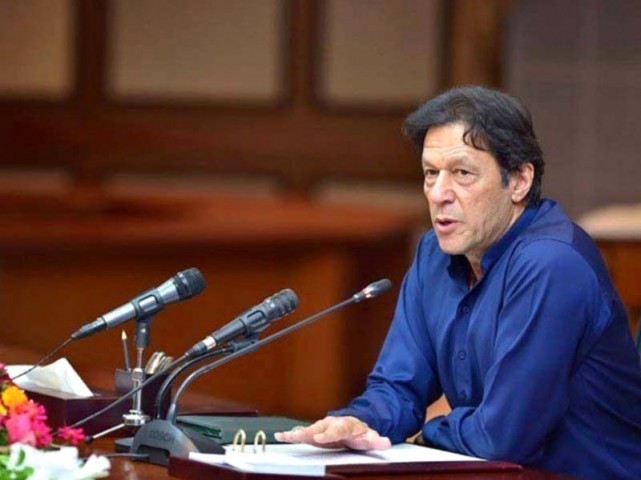 ISLAMABAD: Prime Minister Imran Khan on Tuesday tasked his ministers and independent experts to prepare a blueprint of parallel tax machinery that will go after tax evaders amid his growing frustration with the poor performance of ‘old’ Federal Board of Revenue (FBR).

The PM directed participants of meeting to explore the possibility of either outsourcing functions of catching tax evaders, recruit new people or set up a special wing to perform the task of broadening the tax base, at least three people who attended the meeting told The Express Tribune.

He desired that one of these options should be finalised to give a push to his election campaign promise of broadening the tax base and doubling the tax collection to Rs8 trillion. The PM did not accept a proposal of Defence Minister Pervez Khattak for a door-to-door survey to find out potential taxpayers.

The independent experts proposed to separate audit and litigation functions from the FBR in the first place. Khan wanted a mechanism where there is least human interaction with the people and the task is performed by relying on information technology tools, according to the meeting participants.

The PM tasked participants to find a workable solution at the earliest to take benefit of data profiling of nearly 2.8 million non-filers by the National Database and Registration Authority (NADRA). He wanted that these people should be chased by those who do not have tainted reputation like the FBR.

The premier told the FBR chairman that his department cannot be reformed and there is a need to do something out of the box, according to a cabinet minister. Hammad Azhar opposed the idea of taking $400 million loans from the World Bank in the name of reforming the FBR. However, the FBR management was keen to take this loan despite poor results of last WB-funded $150 million reform programme.

The meeting took place days after PM Khan publically said he could dismantle the FBR due to its poor performance – the frustration that he again expressed during the Tuesday’s meeting. At more than one occasion, the PM addressed the FBR chairman and told him his organisation could not be reformed.

“The country’s tax system is unjust that puts more burden on the poor. The current tax system and the revenue collection do not support the economy in any manner,” the PM said.

The FBR sustained Rs237 billion shortfalls against its first eight months tax collection target, which has brought the organisation and the government under extreme pressure. The premier has repeatedly said the FBR’s failure can pose existential threats.

The FBR’s revenue collection increased only 3% during July-February period, which was three times lower than the nominal the Gross Domestic Product (GDP) growth rate.

NADRA chairman shared a synopsis of data profiling of the non-filers with the PM. The data, collected by NADRA and through withholding sources, showed people owned dozens of vehicles, went abroad many times a year and have multiple bank accounts but they do not file their annual returns.

This suggests that the FBR lacked the will to go after the non-filers and PM Khan now wants that this job should be done by somebody but not the FBR. NADRA had done similar profiling about six years ago but things remained on papers due to opposition from within the FBR.

It was suggested during the meeting that all the 2.8 million people may not be potential taxpayers, as many of them might be enjoying agriculture income tax exemptions and might fall under the category of presumptive tax regimes.

However, this does not stop them from filing their annual income tax returns, as is required under the Income Tax Ordinance of 2001. There are only 1.6 million income tax filers in the country.

One of the private sector members advised that the government should not beat the drums about the tax dodgers, as there are millions of people who pay indirect taxes but they are not filers.