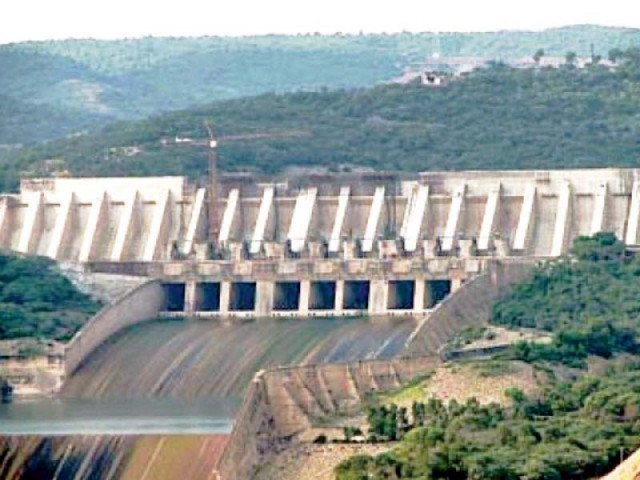 Diamer-Bhasha dam and power project has been divided into two parts to reduce its size and financing requirements after World Bank, ADB and China refused to fund the project. PHOTO: FILE

ISLAMABAD: Amid euphoria over the construction of mega dams, the federal government has not yet arranged financing for $10 billion worth of much-trumpeted Diamer-Bhasha and Mohmand dams, which can further delay their completion.

The Economic Coordination Committee (ECC) of the cabinet on Tuesday reviewed various options to finance the dams including asking provinces to share cost and collecting a significant chunk from electricity consumers through tariffs.

The ECC also approved a supplementary grant of Rs7.4 billion for the financial inclusion project besides approving Rs2 billion in subsidies for the Ramazan package.

Headed by Finance Minister Asad Umar, the ECC took briefing on the status of mega dams. However, many questions on the sources of financing of three dams – Diamer-Bhasha, Mohmand and Dasu – remained unanswered. The ECC expressed concern over the delay in land acquisition for the Dasu hydroelectric power project despite availability of financing.

The ECC decided to rationalise the federally funded portfolio of water projects aimed at diverting resources towards projects of national importance. The Ministry of Planning was asked to review the water sector portfolio. The proposal was made by former water resources secretary Shumail Khawaja.

Wapda chairman briefed the meeting on the status of Diamer-Bhasha dam, Mohmand dam and run-of-the-river Dasu project. Despite availability of financing for the Dasu hydroelectric power project, the previous Pakistan Muslim League-Nawaz (PML-N) government failed to resolve land acquisition issues. No progress was also made in first seven months of the current Pakistan Tehreek-e-Insaf (PTI) government. The finance minister decided to hold another meeting on the dams and directed Wapda to come up with firm answers to sources of financing.

Prime Minister Imran Khan and former chief justice Mian Saqib Nisar had launched a fund-raising campaign for the two mega dams. So far, Rs10 billion has been donated by resident and non-resident Pakistanis.

In April last year, the then government approved the construction of Diamer-Bhasha dam at an estimated cost of Rs480 billion, aimed at increasing the country’s depleting water storage capacity. The dam will have live storage capacity of 6.4 million acre feet and installed power generation capacity of 4,500 megawatts.

The project has been divided into two parts to reduce its size and financing requirements after the World Bank, the Asian Development Bank and China refused to fund the project. Pakistan has been struggling to raise money from international institutions amid Indian opposition to the project.

According to the original plan, the dam component of the project will be completed by seeking foreign loans of Rs154 billion and providing Rs238 billion from the budget. The remaining amount will be raised by Wapda from its own resources.

The ECC was informed that 40% cost of the Diamer-Basha dam or Rs190 billion would be collected from electricity consumers through tariffs. A participant of the meeting suggested that the federal government should ask provinces to share cost of the dam. The finance ministry also endorsed the proposal.

Wapda was of the view that $1.4 billion in foreign financing could be arranged by contractors – a reply that the ECC did not accept.

The groundbreaking ceremony of Diamer-Bhasha dam has been performed for nearly six times without first achieving financial close.

State Bank of Pakistan (SBP) Governor Tariq Bajwa suggested that Pakistan could use the local currency supply line, which was available to Chinese contractors from their government. He was of the view that nearly 5 billion renminbi was available that could be used for financing the Diamer-Bhasha dam. The Economic Affairs Division had been asked to explore the possibility.

The ECC also took an update on the $3-billion Mohmand dam. It was informed that the Asian Infrastructure Investment Bank (AIIB) was keen to provide at least $500 million in loan for the project, subject to the procurement of land first.

The amount could be doubled to $1 billion, if Pakistan quickly addressed the land acquisition issues and the project was ready for financing, said a participant of the meeting.

The ECC approved a Ramazan package worth Rs2 billion to provide 18 products at subsidised rates to consumers through the Utility Stores Corporation. The maximum subsidy of Rs525 million has been given on ghee by reducing its rate by Rs15 per kg. Another subsidy of Rs10 has been given on cooking oil, which will cost Rs245 million.

The ECC also approved a supplementary grant of Rs1 billion for the Federal Board of Revenue to boost its revenue collection capacity. In order to pay dues to legal heirs of deceased employees of Pakistan Steel Mills on account of provident fund, gratuity and payroll, the committee approved a grant, which would help address problems of the legal heirs of deceased employees.