Police claime­d that the arrest­ed suspec­ts were being taken to JPMC but they succum­bed to their injuri­es on the way
By Our Correspondent
Published: March 7, 2019
Tweet Email 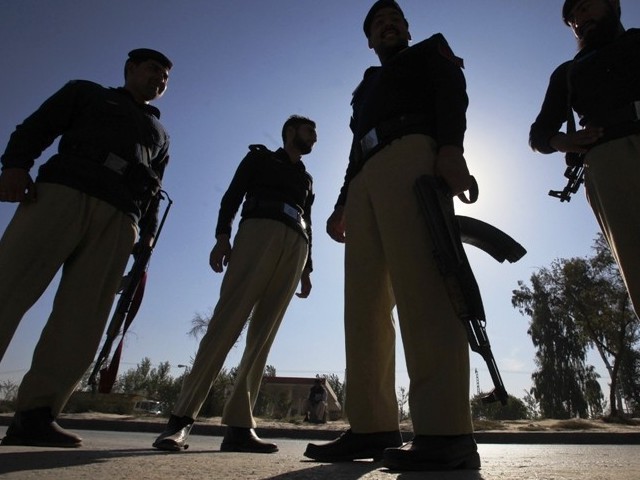 Police claimed that the arrested suspects were being taken to JPMC but they succumbed to their injuries on the way. PHOTO: FILE

KARACHI: Three suspected robbers were killed in an alleged encounter with police in Gulshan-e-Jamal on Wednesday. The police claim to have recovered weapons, mobile phones and motorcycles from their possession. However, no policeman was injured in the encounter. The deceased have not been identified as yet.

According to Sharae Faisal SHO Safdar Mashwani, four persons on two motorcycles entered the streets of Gulshan-e-Jamal and attempted to rob citizens. They were trying to break into a house with the intention of robbery when the police arrived. The suspects opened fire at the police and attempted to escape but they were chased by the police who managed to encircle them in the next street. Of the four suspects, three were arrested in an injured condition while the fourth managed to escape. He claimed that the injured were taken to Jinnah Postgraduate Medical Hospital immediately but they succumbed to their injuries on the way.

Robber killed, another arrested after shootout

Mashwani, while speaking to The Express Tribune, said that the suspected robbers could not be identified as yet but their fingerprints had been collected and efforts were being made to identify them. The collected fingerprints would be cross-checked with the existing criminal data, he added.

According to Mashwani, the weapons recovered from the suspects would be sent to the forensic division for analysis. Police claimed to have seized two motorcycles, three pistols, mobile phones and other stolen items as well.

The Express Tribune got access to the CCTV footage of the alleged encounter. In the footage, police officials can be seen clearly standing behind a wall. Two of the officials are in uniform while another is dressed in plain clothes. A citizen, unaware of the situation, can be seen entering the street in which the suspects are present. The citizen is then seen running towards the police. The crossfire begins and two more police officials arrive at the scene. A man, dressed in a white shalwar kameez, riding a motorcycle can also be seen in the footage. He may be another police official in plain clothes.

Mashwani informed The Express Tribune that there were reports of frequent incidents of street crimes in Gulshan-e-Jamal and its surrounding areas in recent days. The police had put the area on high alert and had deployed personnel in the area, he said.

Corroborating that heavy police force was deployed in the area, East SSP Ghulam Azfar Mahesar said that the area was on high alert due to the Pakistan Super League (PSL) and because multiple street crimes had been reported in Gulshan-e-Jamal. According to Mahesar, the Sharae Faisal SHO and his team was on duty on Wednesday morning when they were informed that some persons on motorcycles were trying to enter a house. When the police encircled them they opened fire, he said adding that three suspects were killed on the spot, contrary to the statement of the SHO who claimed that the robbers died on the way to the hospital.