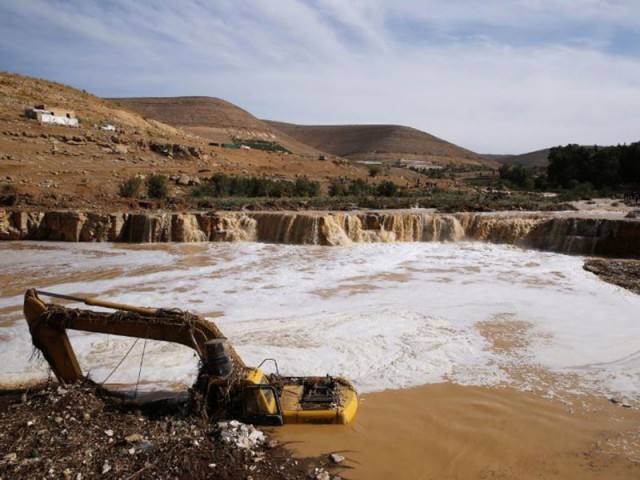 An excavator is partially submerged in a stream after rain storms unleashed flash floods, in Madaba city, near Amman, Jordan, November 10, 2018. PHOTO: REUTERS

QUETTA  : Provincial Minister for Information and Higher Education Zahoor Ahmed Buledi on Monday claimed that the provincial government and its machinery remained fully functional during the recent rains.

“Relief operation has been over in rain-hit districts,” Buledi said while addressing a news conference. He was flanked with Director General Public Relation Naeem Bazai.

The minister said in the first phase the provincial government had imparted 8,000 tents, food bags and necessary edibles for distribution in flood and rain-hit areas.

“Despite early warnings issued regarding the rainy spell and snowfall across the province, extensive damage to life and property has been reported in the province,” the minister said.

Informing of the death toll during the recent rains, he said six people were killed in Lasbela and Khuzdar in the first spell of torrential rains and flash flood.”

Buledi added 28,000 people were rescued and provided one-month ration. “From March, the second spell of rain and snowfall hit major parts of the province in which 13 people were reportedly killed and 12 sustained injuries.”

Sharing details of relief and rescue operation going on since last Friday, Buledi said some 5,000 tents, food items and other necessary goods were dispatched to flood-hit areas and those districts affected by snowfall.

The minister said highways blocked in Kan Mehtarzai, Zarghoon Ghar and Ziarat due to snowfall have been cleared.

Responding to a query, the provincial minister said, all provincial departments were on board and officers were on call, all stranded people have been safely rescued and evacuated to safe places.

Talking about the Chaman blast, Buledi, while refuting reports that it was an IED blast, the explosion occurred in Chaman’s Mall Road after a heavy voltage electric wire fell on a motorbike.

The Provincial Disaster Management Authority has released the total damages and casualties assessment report on Monday.

According to the report, the total of six people had been killed during the first spell of torrential rains and flash flood in Balochistan’s Lasbela District while four people were reportedly injured in Khuzdar.

“Major asset damages were reported in District Qilla Abdullah where 1,970 houses were collapsed while 565 buildings partially damages, 227 shops have been damaged in Qilla Abdullah.” The report said and termed Qilla Abaullah as most affected in rain and flood.

“Seven people stranded in heavy snowfall in Ziarat were safely rescued after four days and shifted to a save location.” AC Ziarat Abdul Majeed said.

Administration in Sherani district found a body from snow in Koh-e-Sulamn and shifted to DHG Hospital. The body was identified as Abdul Latif who was hit by a sow mound. The body handed over to the heirs for burial.