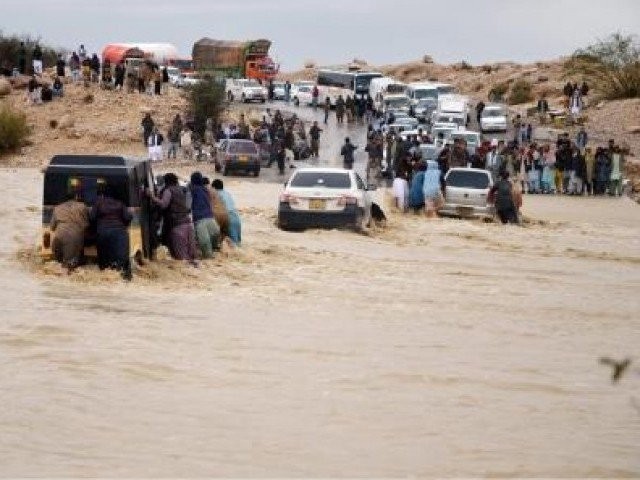 QUETTA  : As torrential rains and snowfall wreaked havoc in different parts of Balochistan, killing eight people and rendering eight to ten thousand homeless and hundreds stranded in floodwaters, the security forces on Sunday stepped in to aid the civil administration in rescue and relief operations.

The provincial government had declared emergency in Qila Abdullah and asked Pakistan Army to help in rescue operation in the flood-stricken areas.

According to an update shared by the Inter-Services Public Relations (ISPR), army aviation helicopters had been called into action to rescue those stranded in the affected areas.

The helicopters remained busy throughout the day in evacuating those stuck in the floods to safer places.

“Approximately 1,500 families have been rescued in Dureji and Qilla Abdullah areas and rations have been provided to 3,500 families in the rain-affected areas,” the ISPR update said.

Army doctors and paramedics had been providing medical assistance and medicines to the victims.

The army personnel set up relief camps in Makran, Lasbela and other snow-covered areas of the province’s north.

The paramilitary troops restored traffic on highways after opening sewage lines and small bridges in Pishin.

A bus carrying 45 pilgrims including women and children from Punjab was struck in the Shah Noorani area. Security forces along with local administration reached the spot and rescued the pilgrims after four hours of struggle.

Lasbela Deputy Commissioner Shabbir Ahmed Mengal said, “All the pilgrims who were coming from Punjab are safe and shifted to a secure location”.

Security forces evacuated hundreds of people who were stranded in Kech district.

Additionally, they rescued the vehicles that were stranded at Khojak Pass, Lak Pass and in the Shela Bagh area.

The Frontier Corps rescued 400 families to a nearby government school and hospital in Qilla Abdullah and distributed 30 tonnes ration among the affectees. The force distributed food among people stranded in snow at Kozhak Top.

The FC along with district administration commenced relief and rescue operation in Qilla Saifullah, Kan Mehtarzai, Khanozai, Ziarat and other areas.

In the ongoing efforts, the FC personnel and local administration rescued 16 people, including children and women who were stranded in rivers Nihing and Kech Kour due to heavy rain and flood in the catchment area in Iran.

Officials said that the bridge on river Kech was closed for traffic as a flash flood entered the river after washing away several small dams while Rood Bin bridge on river Nihing collapsed.

“The floodwater entered several villages of Kech and 16 people of Askani Kour Absar were stuck in the heavy rain,” a senior official of local administration said, adding that they were rescued by FC personnel using helicopters.

Talking to a private news channel on Sunday, the chief minister said that around eight to ten thousand people had been affected by torrential rains and snowfall.

“Makran Division, Turbat and Lasbela were most affected by torrential rains while major damages were reported in Lasbela. Hundreds of people were stranded in Ziarat, Kan Mehtarzai, Pishin, Qilla Saifullah, Qilla Abdullah and Chaman because of heavy snowfall.

CM Balochistan said that the prolonged era of drought had ended across the province and a majority of dams in Balochistan were filled with water.

The chief minister along with home minister and Provincial Disaster Management Authority (PDMA) officials took an aerial view of Ziarat, Qilla Abdullah, Pishin and Qilla Saifullah and directed the district administrations and PDMA to intensify relief operation in the snowfall-hit areas.

Meanwhile, Quetta and other areas experienced power outages since Friday evening when it started raining heavily.

He observed that electricity to hospitals and water supply to government offices and local residents would be restored at the earliest.

Qesco chief said that due to heavy snowfall in Ziarat, Pishin and other areas, electricity poles had collapsed which was creating hindrance in restoring power supply.

Hundreds of travellers from Punjab and Khyber Pakhtunkhwa provinces were stranded as roads were closed and bus, coach and rail services were cancelled.

Heavy machinery such as bulldozers had been sent to remove snow from the road linking the Ziarat Valley to Sanjavi, Duki and Harnai areas.

IG FC provided food and medicines for 2000 affected families of Mand and Tamp which was dispatched through helicopter.

Meanwhile, Chairman Aid Crescent Balochistan Shabbir Baiyan on the appeal of IG FC sent three trucks of goods including food stuff, sleeping bags and medicines from Quetta to Turbat for the affectees.

A well-equipped ambulance was also handed over to FC colonel Shahid in Turbat.