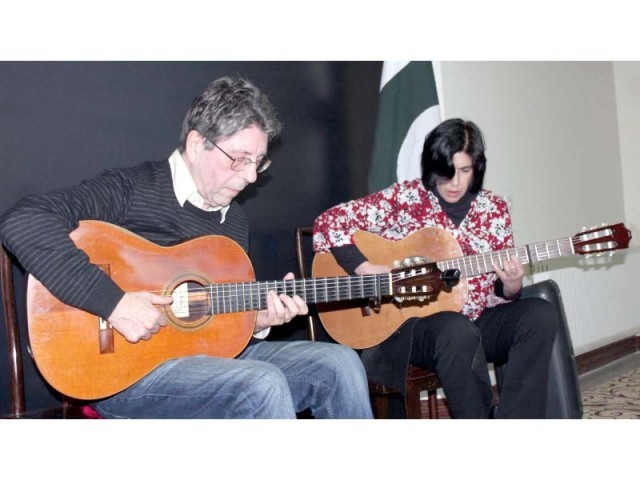 ISLAMABAD: Peace and progress are interlinked and so, peace should be given a chance as war on the other hand has potential to increase difficulties. This was said by the Argentinean Ambassador Ivan Ivanissevich, during a musical programme arranged with the cooperation of the Argentinean Embassy on Wednesday.

Commenting on the escalation between India and Pakistan, he said people on both sides of the border have made enormous sacrifices.

Moreover, while speaking about the upcoming cultural programme he said cultural, art and music activities aid in diverting people’s minds.

Further, he also expressed his strong connection with the Pakistani culture and revealed that Pakistani music had no match. He hailed Pakistan’s treatment of the Indian pilot who was captured on Tuesday, by Pakistani forces.

He warned both neighbors to refrain from war and added that war only drags a country to backwardness.

Pakistan eager for US diplomacy between Islamabad and New Delhi

While praising Pakistani music he said that the government of Argentina would arrange cultural programmes in Pakistan in the future.

“After visiting Pakistani cities, I can conclude that Pakistan is one of the most beautiful countries in the world,” he said.

Magdalena, who is the sister of Ivan and a singer, expressed her attachment with the local folk music and asserted that Pakistan possessed a lot of natural beauty. She added that it was an honour to perform in Pakistan and revealed that she would be performing in Lahore soon.

Argentinean-based musicians in the ceremony presented spectacular performances in the event. Furthermore, the musical programme included students from Protection of the Rights of Children, Master Ayub Park School, Islamabad Model School for Girls and the students of the National College of the Arts.

Once again the Argentine Embassy, assisted by the sponsorship of Islamabad Serena Hotel, brought together students from various social backgrounds, this time to take part in a musical workshop to be conducted by the French-Argentine musician and teacher, Magdalena Ivanissevich.

Students of the twin cities graced the event, including the Society for the Protection of the Rights of the Children (SPARC), Master Ayub’s Park School, Islamabad Model School for Girls G-6 and G-9, National College of Arts Rawalpindi and Rung School of Music and Arts. The show aimed at bringing together youngsters and teachers to learn about South American and Argentine music, as well as basic musical practices.

The idea was to open new musical horizons for students who would otherwise not have an opportunity to have access to them. The said event is part of the series of concerts and workshops organised by the Argentine Embassy in Islamabad involving Argentine-French duo of Magdalena Ivanissevich and Carlos Molinaro, who travelled from France to perform and deliver workshops on music from many South American countries.

Both artists have an extensive teaching experience in Paris, and they have also performed in France and other European, Latin American and Asian countries in the past. During the workshop at the embassy, Magdalena taught and engaged in musical games that included percussion and singing.  She also sang South American songs and explained their roots in many different regions, including how they drew inspiration from Native American, European and African cultures.

During the workshop at the Embassy, Magdalena taught and engaged participants in musical games that included percussion and singing.

In his speech Ambassador Ivan Ivanissevich highlighted the importance of organising such events in order to widen the scope of education beyond academics.  Music has a very important formative role to play since it helps in developing our imagination and promotes more dynamic thought processes as well as team work.

Finally, he expressed his hope that whatever was practiced and learned at the workshop may be reproduced by the respective schools attending the event. At the end of the show, the artist and the Ambassador mingled with the students and the teachers. Food boxes were distributed with the kind cooperation of the Serena Islamabad Hotel. The duo will perform in Lahore at the Olomopolo Media Centre on March 2 at 6pm and the Rafi Peer Cultural Centre on March 3 at 5pm.  On March 6 they will perform in Islamabad at the FACE Cultural Centre at 7.30 pm.

Magdalena Ivanissevich has a developed a long teaching career in Paris beside her performances in concerts and festivals.  She directed children and adult choirs, and she also gave musical education and vocal improvisation workshops aimed at a wide range age group (children and teenagers).

Experts urge Pakistan to be watchful of US-Taliban peace deal