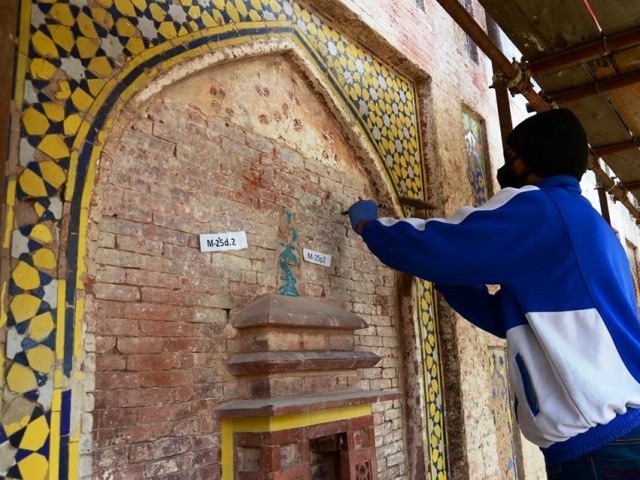 Restoration work of a wall in Sahi Qila under way. PHOTO: EXPRESS

LAHORE: The first phase of the restoration of the world’s biggest picture wall has been completed in the Shahi Qila of Lahore. The wall narrates the story of the Mughal Empire.

The Walled City of Lahore Authority (WCLA) spokesperson Tania Qureshi said documentation of the restoration process stated in 2015. The restoration of one part, which measured 30 feet in length and 40 feet in height, was completed in 2016. Subsequently, a conference of archaeological and conservation experts from all around the world reviewed the work.

Based on the recommendations of this conference, restoration and renovation on the western part of the wall began in 2017. This 800-metre long wall of Shahi Qila is a very important structure as it houses works of famous burinists, sculptors and mosaic artists.

UNESCO declared the Shahi Qila a world heritage site due to this wall. The pictures on this wall reflect different Mughal regimes. Apart from the Walled City of Lahore Authority and Agha Khan Culture Trust, the Norwegian and German embassies have supported the restoration project.

Makhdoom Rasheed, an archaeological expert, who worked on this project, said the biggest challenge was to restore the murals off the wall back to their original form. “It is easy to create something new and replace the old. However, restoring an old mural to its original form is very difficult and demands meticulous work,” he remarked.

“A minor mistake can distort the history of this place. We investigated each picture on the wall and considered different aspects including the colour used in the pictures, the size and ingredients used in them,” he said. “After lots of hard work, we are able to protect and restore the beauty of that wall to its original form.”

The WCLA has also arranged lighting to highlight the beauty of the wall and grab the attention of visitors.