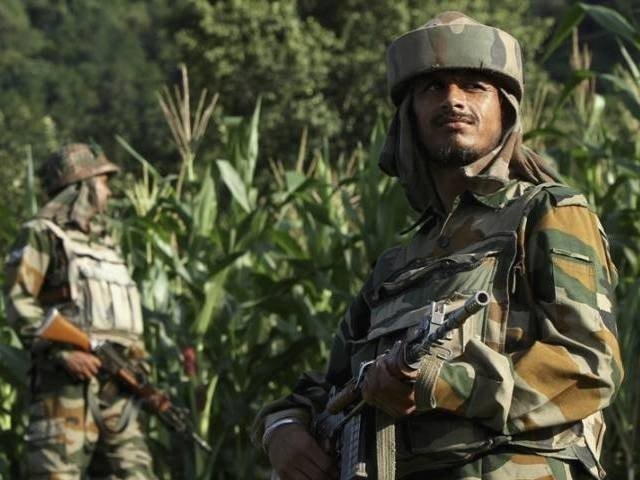 New guns also include an anti-material rifle that can penetrate through concrete and metal objects. PHOTO: REUTERS/FILE

ISLAMABAD: Indian army has started to equip its troops with new lethal high-precision rifles designed for sniper missions along the Line of Control (LoC).

These deadly sniper rifles also include an anti-material rifle that can penetrate through concrete and metal objects, such as vehicles, Kashmir Media Service reported on Friday.

The guns being given to the troops are the 0.338 Lapua Magnum Scorpio TGT by Beretta, and the 0.50 Calibre M95 by Barrett.

As per a report published by Srinagar-based daily on its website, the US-made Barrett M95 is an anti-material rifle which has a whopping range of 1,800 metres.

The other gun that will be available to the troops along the LoC is the Victrix Armaments .338 Lapua Magnum Scorpio TGT, made by Italian firm Beretta.

Under the General Officer Commander-in-Chief of Udhampur-based Northern Command’s special financial power, the army floated tenders for procurement of 5,719 sniper rifles from global vendors in January.

“We have been able to commence the induction of the new sniper rifles along LoC and some more are still in the pipeline”, General Officer Commanding in Chief (GoC-in-C), Lt Gen Ranbir Singh, was quoted by the Press Trust of India as having said in reply to a question.

He was asked when the army will be inducting 5,719 sniper rifles from global vendors to replace the ageing Russian Dragonov SVD as global tenders have already been floated.

The Indian army commander said some of these equipment have been received and some are likely to come in next sometime, adding the upgradation of weaponry is an ongoing exercise. “Other equipment which enhance our fighting capability is also being inducted. The capability building is in the pipeline,” he said.

Indian Army Chief General Bipin Rawat had said last month that the Northern Command is soon going to be equipped with the new sniper rifles from this month.