The Ayaz Melo is an event to celebr­ate his work on harmon­y, loyalt­y
By Z.Ali / Photo: Amar Sindhu
Published: December 23, 2018
Tweet Email 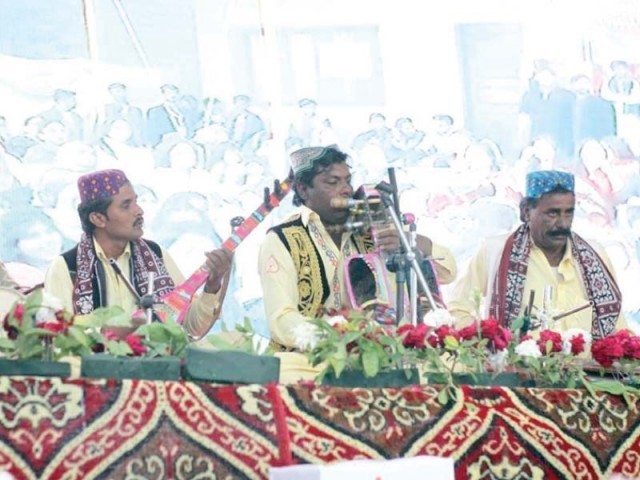 A choir of raagis [singers and musicians] enthralled the audience, with their rendition of a waee [poem] of Bhitai, at the musical night held on the first day of the event. PHOTO COURTESY: AMAR SINDHU

HYDERABAD: Making the literary work of Shaikh Ayaz, a Sindhi poetic colossus of twentieth century, relevant to the present, the fourth annual edition of five-day Ayaz Melo commenced in Hyderabad on Friday. The event, hosted by Cafe Khanabadosh, is taking place in the idyllic setting of a park in the premises of Sindh Museum.

Besides the intellectual discourse and poetic recitations, it is also laced with performances of dance and music with each day concluding with mesmerising musical nights. The recipient of Sitara-e-Imtiaz, Ayaz (1923-1997), authored more than 50 books, including a few of Urdu poetry, with revolution and romance being the outweighing themes. He died on December 28, 1997, and was laid to rest near the shrine of Hazrat Shah Abdul Latif Bhitai in Bhit Shah, Matiari district.

The festival began with a photo exhibition depicting portraits of his life, family and contemporaries. Before the inaugural panel discussion, a choir of four raagis [singers and musicians] of Bhitai sang a waee [poem] of Bhitai.

“Ayaz loved Sindh and when you love someone you dream to see all the good in the world happen to it,” commented Zahida Hina, a novelist, columnist and short story writer. She said that the poet’s dream still remains unfulfilled.

“The conspiracies are still afoot to wrest Sindh from its real heirs.” She bewailed that the situation has pitted the people of Sindh against each other. “Instead of the innocent victims fighting against the cruel and usurpers, they are fighting each other and they have forgotten that the real difference among humans is between the cruel and innocent.”

She recalled that in 1958 when some conspiracies divided the Urdu and Sindhi literary persons, Ayaz was among the few who promoted and wrote about harmony, loyalty and love. “He wasn’t among the writers who used their pens like knives but he was the one who tried to unite the hearts.”

Hina likened Ayaz with Bhitai, describing the 18th century sufi poet as Taj Mahal and the former as Qutub Minar among the Sindhi poets from 18th to 20th centuries. For her, his poetry contained spirit of Bhagat Kabir, Amir Khusro and other poets. “Sometimes we find him with Khusro in River Ganges and at other times with Bhitai in Sindh’s desert.” Ayaz regarded highly Urdu’s first poet Amir Khusro Dehlvi who also finds mentions in his poetry.

She also praised him translating Bhitai’s monumental poetry in Urdu, allowing the vast readership and literary figures of that language to read the sufi poet. Hina recalled that the then prevailing social and political situation in Sindh made Ayaz emerge as a poet of resistance and a hero for the youth.

Dr Asif Farrukhi, an acclaimed writer and co-founder of Karachi Literature Festival (KLF), said Ayaz nurtured an approach of a messiah. “One of his distinctions was that he never remained associated with the establishment,” he said pointing to his rebellious poetry during the 1965 war which landed him in jail. He said Ayaz was proficient in Persian and Urdu languages, besides English.

The playwright Noorul Huda Shah objected to certain critics of Ayaz who dub him as traitor of Sindh only because he accepted a government job by becoming vice chancellor of Sindh University during Zulfiqar Bhutto’s government. She distinguished between literary criticism and mudslinging, saying that some self-styled critics rather had a penchant for the latter.

“The poets like Ayaz and Amar Jaleel are treasures of our language, culture and Sindh,” she said, deploring that Jaleel’s criticism over the manner in which Sindhi culture day is celebrated has landed him at the center of vituperation. “The writers are creative finds. Their thoughts can’t be confined to the preferences.”

Hyderabad Commissioner Muhammad Abbass Baloch advised the people who did not meet Ayaz in his life to attend the festival to familiarise themselves with the poet. “He was a revolutionary poet. He gave a vision and leadership to Sindh.”

The event’s organiser Associate Professor Amar Sindhu said that the purpose of celebrating the festival is to give recognition to Ayaz and his work and to acquaint the new generation with the poet.

Jaun Elia – popular but not great

Sindhu said she wished to see the annual festivals taking place to commemorate Ayaz since his death. She told that she and her companions organised the first commemorative event for Ayaz at Sindhology Department of Sindh University in 2000. The first Ayaz Melo, which Sindhu and her friends pioneered, took place in December, 2015.