US special envoy for Afghanistan calls on FM Qureshi

US special envoy for Afghanistan calls on FM Qureshi 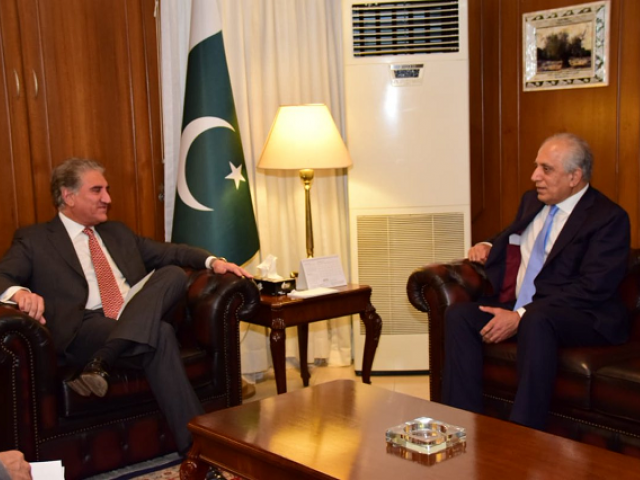 FM Qureshi, assured the US side of Pakistan's steadfast support for a negotiated settlement. PHOTO: TWITTER/ @ForeignOfficePk

US Special Representative Zalmay Khalilzad called on Foreign Minister Shah Mehmood Qureshi at the Ministry of Foreign Affairs on Tuesday and reiterated President Trump’s desire to seek Pakistan’s cooperation for peace and stability in Afghanistan.

The foreign minister assured the US side of Pakistan’s steadfast support for a negotiated settlement to the now 17-year-old conflict.

US Special Rep Amb Zalmay Khalilzad @US4AfghanPeace called on the FM. Amb Khalizad reiterated President Trump's desire to seek Pakistan's cooperation for peace and stability in #Afghanistan. The FM assured the US side of Pakistan's steadfast support for a negotiated settlement. pic.twitter.com/XIij5pZgG3

Diplomatic, security and defence officials from both sides were present at the meeting during which peace and political settlement in Afghanistan were also discussed.

On his 2nd visit to #Islamabad, US Special Rep Amb Zalmay Khalilzad @US4AfghanPeace held a meeting with FS Tehmina Janjua. Officials from diplomatic, security and defense from both sides present at the meeting. Peace & Political settlement in #Afghanistan discussed@statedeptspox pic.twitter.com/FnE7pL6Qa8

During the visit, Khalilzad is expected to conduct meetings with the top civil and military leaders of the country and will also take the them into confidence over American negotiations with the Taliban.

This is Khalilzad’s second visit to Pakistan in the previous two months, he was due to visit last month, however, it was postponed due to unavoidable reasons.

And I’m off again: Pakistan, Afghanistan, Russia, Uzbekistan, Turkmenistan, Belgium, the United Arab Emirates and Qatar. Watch this space for updates on our efforts to support & facilitate an inclusive peace process in Afghanistan. https://t.co/hf1ftW4Wzb

The special envoy is visiting eight countries including Pakistan, which include Afghanistan, Russia, Uzbekistan, Turkmenistan, Belgium and the UAE.

The US Department of State announced in a press release on Sunday that, “Special Representative for Afghanistan Reconciliation Ambassador Zalmay Khalilzad will travel to Pakistan, Afghanistan, Russia, Uzbekistan, Turkmenistan, Belgium, the United Arab Emirates, and Qatar with an interagency delegation from December 2 – 20.”

“Special Representative Khalilzad will be in communication with President Ghani, Chief Executive Abdullah, and other Afghan stakeholders to coordinate closely on efforts to bring the Taliban to the negotiating table with the Afghan government and other Afghans.”

In October, US President Donald Trump’s point man for the region held a series of meetings with the Pakistani leadership in Islamabad as part of Washington’s renewed push to bring the Afghan Taliban on to the negotiating table.

Khalilzad, who was recently given the task of spearheading peace efforts in Afghanistan, flew from Kabul where he met Afghan leaders to explore the possibility of reviving the moribund peace process.

Foreign Minister Qureshi told Khalilzad that Pakistan was looking forward to playing its part in finding a political solution to the Afghan conflict.