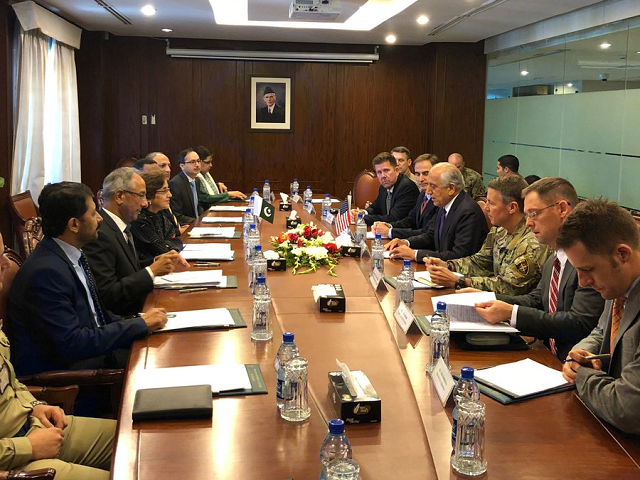 Zalmay Khalilzad is leading an interagency delegation to the region. PHOTO: TWITTER @ForeignOfficePk

ISLAMABAD: US President Donald Trump’s point man for the region on Tuesday held a series of meetings with the Pakistani leadership in Islamabad as part of Washington’s renewed push to bring the Afghan Taliban on to the negotiating table.

Khalilzad, who was recently given the task of spearheading peace efforts in Afghanistan, flew from Kabul where he met Afghan leaders to explore the possibility of reviving the moribund peace process.

He is also scheduled to visit Saudi Arabia, the United Arab Emirates and Qatar, where the Taliban also have their political office.

Foreign Minister Qureshi told Khalilzad that Pakistan was looking forward to playing its part in finding a political solution to the Afghan conflict.

“Pakistan welcomes the US efforts for peace in Afghanistan,” he added.

The two sides also held delegation-level talks on the Afghan reconciliation process at the Foreign Office in Islamabad.

The Pakistani side was led by Foreign Secretary Tehmina Janjua while Special Envoy for Afghanistan Zalmay Khalilzad represented the US side.

The two sides discussed the Afghan situation and its reconciliation process.

Security, defence and diplomatic officials from both the sides attended the delegation-level talks.

Although both the US and Pakistan now have a commonality of views on seeking a political solution to the Afghan problem, the trust deficit between the two is the real stumbling block.

Relations between the two countries are tense despite recent efforts to reset the troubled ties.

At the heart of their stalemate is the US insistence on Pakistan to do more to bring the Afghan Taliban on to the negotiating table. Washington still believes that Islamabad holds a considerable sway over the insurgent group.

Pakistan, however, dispelled that impression and insisted that bringing the insurgents on the negotiating table is a shared responsibility of all the players.

The current push for seeking peace talks with the Afghan Taliban is apparently aimed at ensuring smooth holding of upcoming parliamentary elections in Afghanistan.

Official sources said the US, Afghanistan and even Pakistan are making efforts to convince the Taliban to agree to a ceasefire during the polling process. Efforts are also underway to persuade them to become part of the political process.

The success of those efforts; however, remains to be seen as the Taliban seek direct negotiations with the US. In recent months, the US officials and the Taliban representatives held talks in Doha after Washington allowed its diplomats to reach out to the insurgent groups directly.

The shift is significant given the fact that in the past the US wanted the Afghan government to lead the dialogue process.