Pompeo expect­ed to tap Khalil­zad in latest signal to Taliba­n that US seriou­s about talks to end its longes­t war.
By Reuters
Published: August 23, 2018
Tweet Email 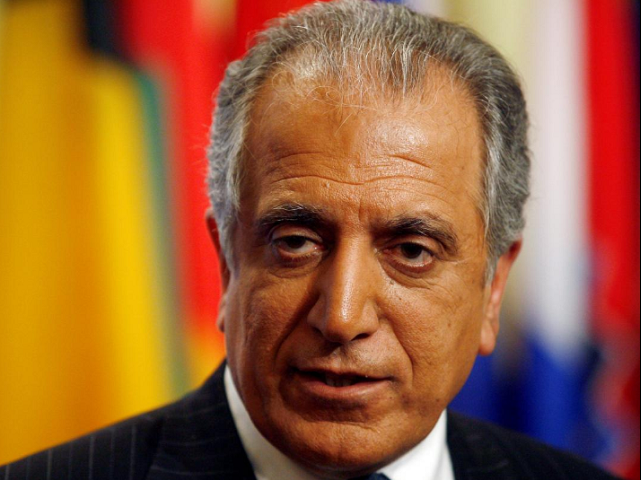 WASHINGTON: US Secretary of State Mike Pompeo is expected to tap Zalmay Khalilzad as his special envoy on Afghanistan, two US officials said, the latest signal to the Taliban that the United States is serious about talks to end its longest war.

Khalilzad is an Afghan-born former US ambassador to Kabul and Iraq.The decision to tap a Republican foreign policy veteran, comes as US military commanders acknowledge a stalemate in the fighting and follows a meeting last month between a US diplomat and Taliban officials to explore possible negotiations.

The administration has not officially confirmed those talks. The two US officials, speaking on condition of anonymity, said they were unsure when the announcement would be made. The White House and the State Department declined to comment, and Khalilzad did not return messages left with his office.

The outgoing U.S. commander of U.S. and international troops insisted on Wednesday that despite a recent wave of violence, Trump’s strategy of an open-ended deployment of U.S. military advisers, trainers and special operations forces and increased air support for Afghan forces is succeeding.

“I believe the strategy is working. … The reconciliation progress is significant and ultimately wars end with a political ettlement,” said U.S. Army General John Nicholson, commander of the NATO-led Resolute Support mission. Trump, however, has expressed frustration at the lack of progress toward a U.S. withdrawal after 17 years of conflict.

In a policy shift during a June ceasefire, Washington said it would “support, facilitate and participate” in any Kabul government-led peace talks with the Taliban. The surge in Taliban attacks, including an assault last week on the provincial capital of Ghazni that took U.S.-backed Afghan forces four days to put down, has raised questions about their interest in negotiations.

Nicholson acknowledged the Afghan government had not significantly increased its control over territory. While he said the Taliban have not responded to an offer this week of a ceasefire from President Ashraf Ghani, two insurgent commanders told Reuters that the insurgents rejected the call.

Khalilzad, 67, is well suited to the difficult task of persuading the insurgents to talk, according to a former senior U.S. official, who asked not to be further identified. In addition to his experience advising or working for four U.S. administrations and his knowledge of Afghanistan’s main languages, culture and politics, he is from the ethnic Pashtun majority and is close to Ghani, the former official said. Pompeo’s decision to tap Khalilzad shows the administration is “serious about getting a peace process going,” said the former official.

One possible drawback for Khalilzad, the former official said, is that he has been publicly critical of neighboring Pakistan, which Washington accuses of providing sanctuary and support to the Taliban but whose cooperation is crucial to any peace effort. Pakistan denies supporting the Taliban.

In a possible wrinkle, the Taliban said on Wednesday it would send senior members to Russia for peace talks on Afghanistan, hours after the Afghan government declined the offer to attend. Washington has also said it would not go.

Khalilzad was born in the northern Afghan city of Mazar-i-Sharif and served in a variety of U.S. government posts. As an aide to President George W. Bush, he helped plan the U.S. invasion of Afghanistan that followed the Sept. 11, 2001, attacks by al Qaeda, which had been based in that country. That invasion also ousted the Taliban, whose Islamist government ruled the country beginning in 1996.

Khalilzad served as U.S. ambassador to Afghanistan from 2003 to 2005, and he helped draft the country’s constitution. He went on to be ambassador to Iraq and then U.S. envoy to the United Nations. Nicholson, who after more than two years has become the longest-serving U.S. commander of international forces, is going to be replaced by Army Lieutenant General Scott Miller next month.

The Pentagon also nominated Marine Lieutenant General Kenneth McKenzie, director of the Joint Staff, to be the next commander of U.S. Central Command, which oversees U.S. military operations in much of the Middle East and South Asia, including Afghanistan.