He cried "I love you and Jesus loves you... Here is some fish!" while approa­ching
By AFP
Published: November 22, 2018
Tweet Email 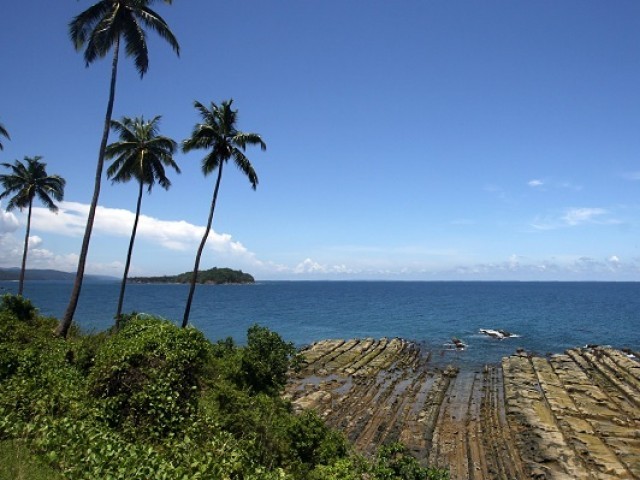 this file photo taken on September 8, 2007 shows the coast line of South Andaman Island near Port Blair, capital of the Andaman and Nicobar Islands. PHOTO:AFP

PORT BLAIR, INDIA: An American missionary killed in a hail of arrows by an island tribe untouched by modern civilisation was bent on converting them to Christianity, it emerged Thursday.

John Allen Chau, 27, was attacked last week as he illegally set foot on the remote North Sentinel Island in the Indian Ocean, after paddling his kayak towards the shore carrying fish and a football as gifts, according to a journal quoted by different media.

He was crying: “My name is John. I love you and Jesus loves you… Here is some fish!”

Tribespeople fired arrows at him, one of then piercing his Bible, and he returned to a fishermen’s boat and spent the night writing about his experiences before going back to the island the next day.

North Sentinel in the Bay of Bengal is home to the Sentinelese people, believed to number only around 150. To protect their way of life, foreigners and Indians are banned from going within five kilometres (three miles) of the island.

The tribe is known to be hostile to outsiders, having reportedly killed two fishermen whose boat drifted onto the island in 2006, and to have thrown spears at a helicopter checking for damage after the 2004 Indian Ocean tsunami.

Authorities in the Indian Andaman Islands, of which North Sentinel is one, say that Chau, paid local fishermen to take him off the shore so that he could paddle the rest of the way himself.

“You guys might think I’m crazy in all this but I think it’s worthwhile to declare Jesus to these people,” the reports quoted a letter to his parents as saying.

“Please do not be angry at them or at God if I get killed,” he said.

“I can’t wait to see them around the throne of God worshipping in their own language as Revelations 7:9-10 states,” he wrote, referring to the apocalyptic final book of the Bible’s New Testament.

Fishermen saw the tribe burying his body on the beach the following day, a fellow missionary wrote in an email to his mother, the Washington Post reported.

“I believe he is still alive,” Lynda Adams-Chau said in a short email to the US daily. Asked why, she replied: “My prayers.”

Indian police have consulted field experts including anthropologists, and tribal welfare and forest officers to help them try and retrieve Chau’s body.

“We have to take care that we must not disturb them or their habitat by any means. It is a highly sensitive zone and it will take some time,” Dependra Pathak, local chief of police, told AFP.

He said that a helicopter and then a ship were sent to the area to identify where the incident took place, and that they were holding talks with experts on how best to handle the delicate situation.

“We maintained a distance from the island and have not yet been able to spot the body. It may take some more days and… (reconnaissance) of the area,” Pathak said.

Since the Indian authorities keep away from the island, it was unclear whether Chau’s killing will have legal repercussions.

Indian police said a murder case had been registered against “unknown” tribespeople and that the fishermen who allegedly helped Chau get to the island were arrested.

London-based Survival International, which defends tribal rights, said that the “tragedy” of the American’s death “should never have been allowed to happen”.

“The Indian authorities should have been enforcing the protection of the Sentinelese and their island for the safety of both the tribe and outsiders,” it said.